US Added A Solid 128,000 Jobs In October Despite GM Strike

WASHINGTON (AP) — U.S. employers added a solid 128,000 jobs in October, a figure that was held down by a now-settled strike against General Motors that caused tens of thousands of workers to be temporarily counted as unemployed. 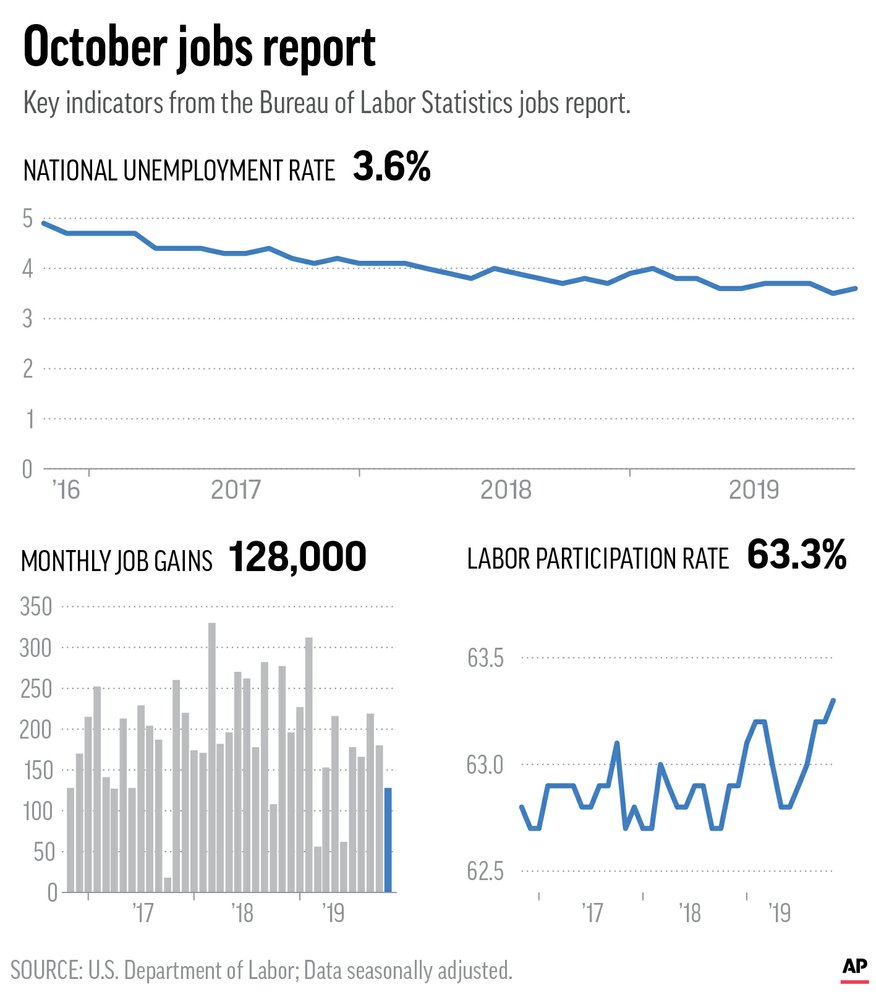 The unemployment rate ticked up from 3.5% to 3.6%, still near a five-decade low. And for a second straight month, average hourly wages rose a decent if less-than-robust 3% from a year ago.

The government also revised up its estimate of job growth for August and September by a combined 95,000, suggesting a healthier employment market than many had thought.

All told, Friday’s October employment report from the government pointed to a still-sturdy job market that remains a vital source of strength for a U.S. economy that’s been weakened by trade wars and a global slowdown. The healthy level of hiring also makes it less likely that the Federal Reserve, which cut short-term interest rates this week for a third time this year, will do so again anytime soon.

“This was an unambiguously strong report,” said Kathy Bostjancic, chief US financial economist at Oxford Economics. “I think the ongoing strength of the labor market helps explain and support the Fed’s leaning in to pause the rate cut cycle for now.”

The solid jobs data put stock investors in a buying mood. The Dow Jones Industrial Average was up about 240 points by late morning.

Friday’s jobs report suggested that further job gains may be coming. Last month, the GM strike contributed to the temporary loss of 41,600 auto factory and likely other related jobs. But the settlement seems sure to lead to a return of those jobs in the coming months.

And the labor force participation rate — a measure of how many people have jobs or are seeking work — ticked up to 63.3%, the best since August 2013. That suggests that a rising number of people think it’s still a good time to find a job.

Besides GM, a temporary drag on hiring last month was the U.S. Census. The government let go of 20,000 short-term workers who had been helping prepare for the 2020 survey.

Job growth so far this year has averaged just 167,000 a month, down from an average of 223,000 in 2018, according to Labor Department figures. Even so, hiring remains high enough to keep the unemployment rate from rising despite the tepid pace of economic growth. On Wednesday, the government estimated that the economy grew in the July-October quarter at a modest 1.9% annual rate.

The economy has been expanding for more than a decade, the longest period of growth on record. But the bump from the 2018 tax cuts are fading and an aging population and other demographic forces are holding back potential growth.

That slowdown could be worrisome for President Donald Trump, who is seeking re-election next year. The economy appears unable to achieve the lasting growth of more than 3% annually that he had promised. Within 30 minutes of the jobs report’s release, though, Trump celebrated the figures on Twitter as a “blowout,” adding that “USA ROCKS.”

Consumers, who drive about 70% of U.S. economic activity, have provided much of the fuel for growth. In September, they modestly stepped up their spending, and their incomes grew fast enough to let them save more, too. A rising saving rate is encouraging because it suggests that households have leeway to keep spending.

Last month, much of the hiring was driven by restaurants, which added 47,500 jobs. But even as consumers help boost growth, business investment has been a drag on the economy in recent months. Collectively, they have slashed their spending on industrial machinery and other equipment, mostly because the U.S.-China trade war has made them reluctant to commit to big purchases. The tariffs between the U.S. and China, the world’s two largest economies, have also reduced U.S. exports.

The jobs report hinted at a mixed picture for the start of the holiday shopping season. Retailers added 6,100 jobs last month. But the rise of e-commerce and increasing concentration of wealth in large U.S. metros have corresponded with the loss of more than 20,000 jobs at retailers over the past 12 months.

A slowdown in pay growth is another source of concern. Hourly average earnings had been rising at a 3.4% annual rate back in February, significantly above the 3% pace in October.

But reduced wage growth might be somewhat misleading. Employers are giving more opportunities to workers who usually start at lower wage levels, and that might have cut into the overall pay gains, said Julia Pollak, a labor economist at ZipRecuriter, an online job marketplace.