Riverboat Ron Is Back After Winning Pair Of Fourth Down Gambles

Analytics can tell NFL coaches what the numbers suggest doing on any given play, especially fourth down.

The final decision is up to the coach.

And in Carolina, “Riverboat” Ron Rivera gambled not once, but twice and came up with a pair of fourth-down conversions on the Panthers way to a 30-20 win over the Tennessee Titans.

His biggest came nursing a 10-point lead on fourth-and-4 with the Panthers at their own 36.

The final decision is up to the coach.

And in Carolina, “Riverboat” Ron Rivera gambled not once, but twice and came up with a pair of fourth-down conversions on the Panthers way to a 30-20 win over the Tennessee Titans. 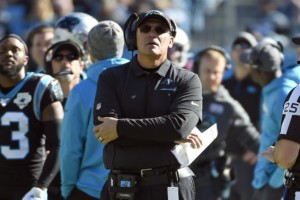 His biggest came nursing a 10-point lead on fourth-and-4 with the Panthers at their own 36.

“I just felt we needed a little momentum,” Rivera said Monday. “Sure, we had a 10-point lead, but they’d just gone down and scored on us, and that was disappointing to me. But I just felt, sometimes you just can’t measure those things with numbers. There’s a feel in the game, and it’s just one of those things I felt we had to do something.”

The Titans opened the third quarter driving 67 yards on eight plays and had forced Kyle Allen to throw incomplete on consecutive plays to bring up fourth-and-4. Rivera decided to turn to a play the Panthers (6-3) had practiced during the week, turning to a safety who played running back in high school in Bridgeport, Texas.

Colin Jones took the ball and ran to his right. Dane Cruikshank of the Titans hit Jones a couple yards shy of the first down, but Jones and his teammates pushed the pile for what wound up a 5-yard gain and a big first down on the way to another TD, a 24-7 lead and all the momentum.

“I’m thinking, ‘Give me the rock,‘” Jones said. “I looked up on the scoreboard and saw ‘Jones: 1 carry for 5 yards.’ I had to make sure I had a better average than Derrick Henry.”

Rivera and the Panthers came into this game just 1 of 7 on fourth down this season, and they wound up a perfect 2 of 2 with the fake punt. Rivera also went for it on fourth-and-2 in the second quarter from the Titans 7. Kyle Allen threw a short pass to a wide-open Christian McCaffrey who scored for a 10-0 lead. 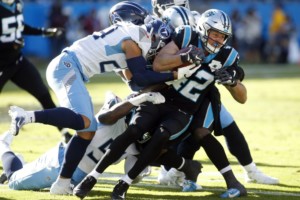 The Panthers coach says his coordinator, Norv Turner, had a couple good options for the play, and the coaches had discussed options for fourth down during the week. Failure would’ve pinned Tennessee at its own 7, which Rivera says he could handle.

“At the end of the day, I still have to make the decisions,” Rivera said.

Coaches often take timeouts to ice opposing kickers. Arizona first-year coach Kliff Kingsbury not only iced his own defense, he cost them a big fourth-down stop before halftime in a 28-25 loss to San Francisco.

Arizona had stopped Jeff Wilson Jr. just shy of the goal line on fourth down with seconds left in the first half except for Kingsbury’s timeout. With the second chance, Jimmy Garoppolo hit Emmanuel Sanders for a 1-yard TD pass and a 21-7 lead. 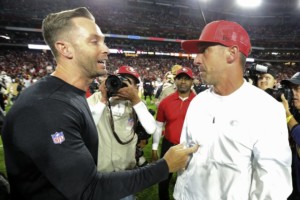 Kingsbury defended the timeout as an attempt to look at what the 49ers wanted to do.

And Kingsbury says he thinks the Cardinals will do it again in the future.

“We felt like it was an opportunity, like I said, to hopefully burn their best play,” Kingsbury said. “Their fourth-and-1 is going to be their go-to call. We just happened to stuff it, and they came back and executed the next play and it didn’t work out for us we wanted to see what they wanted to do and try to burn that play. It worked, but unfortunately it didn’t work out for us.”

Safety Jermaine Whitehead is the NFL’s example No. 1 on what not to do in the heat of anger, and his social media rant while still in his uniform after a 24-19 loss to the Denver Broncos cost him his job Monday when the Browns released him.

Whitehead made several threatening and expletive-laden posts on Twitter after Cleveland’s fourth straight loss, including one at a former NFL player who works for the team’s radio network after being criticized for his tackling. Whitehead’s tweets included several expletives and in one he used a derogatory racial term. 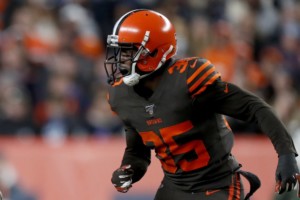 Safety Morgan Burnett, teammates with Whitehead in Green Bay and with the Browns, said everyone is held accountable.

“They stand behind the brand and I think that’s just part of being a professional,” Burnett said. “You have to carry yourself a certain way even at times when you feel like your buttons are being pushed, you still have young people, young kids looking up to us and watching everything we say and the way we move.”

A flag against Jaguars defensive lineman Calais Campbell in London did nothing to help the reputation of NFL officials. Campbell dived, head-first, at Texans quarterback Deshaun Watson and would’ve deserved the personal foul flag thrown if he had made contact.

Campbell missed Watson completely, going left as the quarterback went to the right. The penalty still stood, giving Houston 15 yards to set up a field goal for a 12-3 lead.

Luckily for the NFL, the game was played in London.

8PM: Whose Line Is It Anyway? "Ricki Lake"