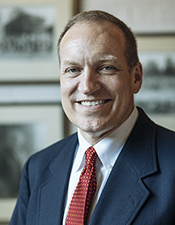 “Dan has been the leader Winthrop needed at a pivotal time in the university’s history. Since he was named 11th president, he has worked to build on Winthrop’s strengths, put students at the forefront of our mission, make the Winthrop experience accessible and affordable, all while helping the university community adapt to the changing realities of public higher education. We are grateful to him for his work at Winthrop over nearly five years,” said McCall.

Mahony came to Winthrop on July 1, 2015. In his first year he called for a campus-wide effort to develop a strategic plan, the result of which was the Winthrop Plan to create a national model for a student-centered university experience with initiatives to drive enrollment, retention, student success, diversity, and fundraising. Many of the goals of the Winthrop Plan were achieved early under Mahony’s direction, moving the university forward in such areas as 6-year graduation rate, diversity among faculty/managerial staff, and unrestricted annual giving. Winthrop recently received its highest ranking in 25 years in U.S. News & World Report’s “Best Colleges” 2020 edition.

While president of Winthrop, Mahony received the McInnis/Ryan Award from the American Association of University Administrators (AAUA), which recognized his principled and ethical leadership practices, and his scholarship regarding issues of justice and ethics in college, high school and professional sport. He also was the inaugural recipient of the Daniel Mahony Award for Social Responsibility from the Office of Diversity Outreach and Development in Kent State University’s College of Education, Health and Human Services. He received the 2018 Academic Achievement in Sport and Entertainment Award from Sport and Entertainment Venues Tomorrow. He also was named to his college’s Hall of Fame at West Virginia University and Pi Kappa Alpha’s Order of the West Range.

McCall said that trustees will name an interim president to lead the university until it is time to begin a search for the 12th president. “We are fortunate that Winthrop has a strong bench of senior leaders who are well prepared to assist an interim in overseeing the university in the immediate future,” he said.