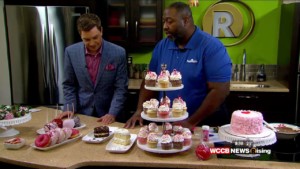 Derek James is accompanied by Frankie White in a Valentine’s Day edition of WCCB News Rising – displaying his baked goods.

The series will challenge five accomplished bakers each episode to transform Girl Scout Cookies into show-stopping edible pieces of art. The show will also take viewers behind-the-scenes for an up-close look at how the treats are made.

The four episode event will be hosted by Alyson Hannigan from How I Met Your Mother.

“I’m thrilled to be hosting Girl Scout Cookie Championship,” said Hannigan in a news release. “The creativity and expertise of these bakers is amazing and the cookies themselves bring back so many childhood memories – I can’t wait to share the show with my girls.”

White who operates a full-service bakery gained the passion to bake in 2009 as a means of therapy while caring for his ailing son. His son, Bradley, later passed away from cancer in 2011.

White’s business is named in honor of his son’s memory.

BW Sweets Bakery is located at 3126 Milton Road in Charlotte and is open from 9 a.m.- 8 p.m. Monday through Saturday and noon to 6 p.m. on Sunday.

White will be featured in the second episode on Monday, February 10 at 8 p.m.