CHARLOTTE, N.C. — There will be a new 15-story tower in uptown Charlotte which will include a new Publix grocery store in a project called Ten Tryon. 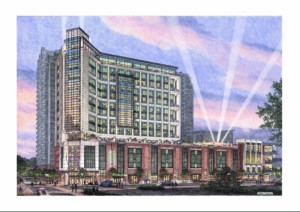 Armanda Hoffler Properties, Inc. announced that they would be the majority partner and lead developer in a joint venture to develop the 215,000-square-foot mixed-use project.

The tower will be located on North Tryon Street, between Ninth and Tenth streets.

Ten Tryon will be within a mile of 32,300 uptown residents and 116,000 employees who work in Charlotte’s center city, the release said.

It will include 175,000 square feet of Class A office space and a new Publix grocery store on the ground floor.

It will feature a vibrant, modern architectural design, the building will include a 9,000-square-foot sky terrace restaurant with a 4,000-square-foot patio as well as a 340-space parking garage, the release said.

According to the release, the partners have secured a lease commitment from a Fortune 100 company as an office anchor.

The project is expected to break ground during the second quarter of 2020 with it expected to be completed in the summer of 2022.

Armada Hoffler Construction Company, a wholly-owned subsidiary of Armada Hoffler Properties, will serve as the general contractor for the Ten Tryon project.

“Ten Tryon has everything we look for in a new ground-up development,” Louis Haddad, President and CEO of Armada Hoffler Properties said in a press release. “With a core urban infill location in one of the fastest growing markets in the country and a mix of office and retail spaces anchored by high-quality tenants, this will be one of our signature projects. We remain extremely optimistic about the future growth potential of the Charlotte market.”

Ten Tryon will support the larger North Tryon Vision Plan which is geared towards developing and sustaining growth in the North Tryon area.