LINCOLNTON, N.C. — The owner of the urn that was found has been reunited with the owner as of Thursday afternoon.

According to a news release, the urn along with a safe, a number of electronics and tool items were stolen in a break-in at a residence on Maiden-Salem Road on October 22, 2019. The break-in happened in the morning hours that day.

The home is located near the location the urn was found.

The urn was returned after a complete identification of it by the owner.

LINCOLNTON, N.C. — The Lincoln County Sheriff’s Office is asking for the public’s help with reconnecting an urn containing cremated ashes to its owner.

The urn was found abandoned in a wooded area north of Lincolnton on February 1. It was discovered when a man was looking at two wooded lots to buy and found a red box on Lakeland Avenue near Summerow Road.

Inside the box was a gold and black colored urn vase. According to the news release, the man told officers it appeared that the vase had been in the area for a long time. 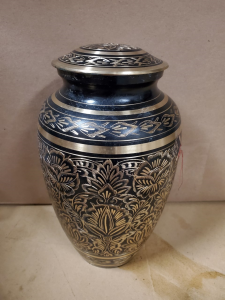 Sheriff’s officers contacted the property owner but he was unaware of who the urn might belong to. There is also no identifying markings on the urn.

Anyone with information is asked to contact the Lincoln County Sheriff’s Office at 704-732-9050.