MIDLAND, Va. (AP) — A 17-year-old boy charged with fatally shooting his mother and 6-year-old brother in their Virginia home was apprehended after he tried to shoplift hair dye, clothes and a backpack from a North Carolina department store, police said Sunday.

Levi Norwood was arrested Saturday after employees at a Target in Durham, North Carolina, found him in the sporting goods section and called police, said Sgt. James Hartman, a spokesman for the Fauquier County Sheriff’s Department in Virginia.

In the store’s parking lot, investigators found a car Norwood stole in Virginia after killing his mother and brother and wounding his father on Friday evening at their home in Midland, Virginia, authorities said. Investigators didn’t immediately find any guns in Norwood’s possession, but Fauquier County Sheriff Robert Mosier said the stolen car would be brought back to Virginia and searched for weapons.

MIDLAND, Va. (AP) — A 17-year-old boy suspected of fatally shooting his mother and his 6-year-old brother in their Virginia home was arrested on Saturday in North Carolina, authorities said. 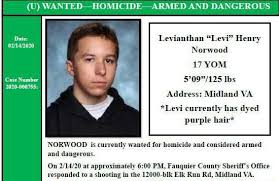 Norwood shot and wounded his father, who escaped and called for help, according to the Fauquier County Sheriff’s Office. The father was in stable condition at a hospital.

The search for Norwood ended Saturday when he was apprehended in North Carolina, after a store’s employees reported a shoplifter to police, a sheriff’s office spokesman, Sgt. James Hartman, said in an email. Hartman said a car that Norwood was suspected of stealing was recovered at the time of his arrest.

Hartman wouldn’t specify where the teenager was arrested, saying Fauquier County detectives needed to get to North Carolina and “do their job first.” He said he would release the location on Sunday or Monday.

Norwood was charged with two counts of murder in the killing of Jennifer Norwood, 34, and her son Wyatt.

Midland is about 53 miles (85 kilometers) southwest of Washington, D.C. Sheriff’s deputies blocked off roads and searched wooded areas near the family’s home.

Law enforcement officers initially believed Norwood had barricaded himself inside the family’s home but didn’t find him in there when they entered the residence after trying to make contact with him for several hours.

Fauquier Sheriff Robert Mosier said on Saturday afternoon that it appeared Norwood had stolen a car about 10 miles (16 kilometers) from the home. Police were searching for a red 2007 Toyota Camry with the license plate WNG 7739.

The car had been reported stolen on Saturday morning. Mosier said bloodhounds had tracked Norwood’s scent to the area of the stolen car.