According to a news release, CMPD have charged a suspect for the murder of 19-year-old Antwon Risher after locating the suspect vehicle associated with the case.

After locating the vehicle, officers attempted a traffic stop but the driver refused to stop and a vehicle pursuit began.

Initially officers lost sight of the vehicle but was able to relocate the suspect after seeing that the car had a collision with another unoccupied vehicle.

All occupants were detained and interviewed. According to CMPD, after the interview 18-year-old Donquavis Johnson was charged with murder, robbery with a dangerous weapon and possession of a firearm by convicted felon. 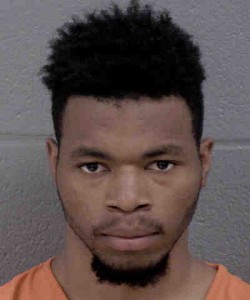 Officers say they responded to an assault with a deadly weapon call around 11:50pm.

Upon arrival, authorities say they located a male victim suffering from a gunshot wound in the parking lot of the apartment complex.

The victim identified as, Antwon Risher, 19, was pronounced deceased by medics and homicide detectives are canvassing the area to determine whether there were any additional witnesses to the incident.

Anyone with information about this incident is asked to call 704-432-TIPS. The public can also call Crime Stoppers at 704-334-1600 or visit the Crime Stoppers website at http://charlottecrimestoppers.com/.

Check out the Mecklenburg County mugshots from Monday, February 6th.

Officials say a Maryland woman conspired with a neo-Nazi leader in Florida to plan an attack on Baltimore's power grid in an effort to further their racist mission.

Check out the Gaston County mugshots from Sunday, February 5th.

Check out the Mecklenburg County mugshots from Sunday, February 5th.

Authorities were called to the mall around 2p.m. Sunday.

How the Cases in Alex Murdaugh's Murder Trial are Shaping Up

Two weeks into the double murder trial of South Carolina attorney Alex Murdaugh, prosecutors haven't presented any direct evidence that he killed his wife and son at their home in June 2021.