CHARLOTTE, N.C. (AP) — The anniversary of the shooting deaths of two North Carolina university students will be observed with an online service because of the coronavirus mandate to stay at home.

UNC Charlotte says on its webpage that it will mark the shooting last April 30 with “United: A Remembrance Program,” to pay tribute to Reed Parlier and Riley Howell, the two students who were killed when a gunman opened fire in a classroom. 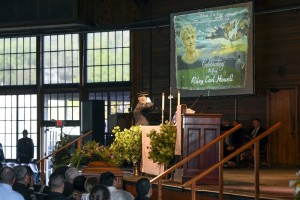 The school said the observance will begin at 5:10 p.m. It will feature student body leaders, Vice Chancellor for Student Affairs Kevin Bailey and CBS News correspondent Don Dahler, who is a UNCC graduate.

The man charged with killing Parlier and Howell pleaded guilty last September to two counts of first-degree murder and other charges. Trystan Andrew Terrell also pleaded guilty to four counts of attempted murder and discharge of a firearm on educational property.

State prosecutors accepted Terrell’s plea during a hearing that was previously scheduled to decide whether he could face the death penalty for the killings.