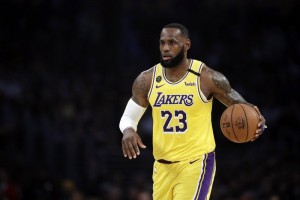 FILE – In this March 10, 2020, file photo, Los Angeles Lakers’ LeBron James (23) dribbles during the first half of an NBA basketball game against the Brooklyn Nets in Los Angeles. If James gets his way, NBA arenas and other sports venues around the country will be mega polling sites for the November general election. (AP Photo/Marcio Jose Sanchez, File)

ATLANTA (AP) — If basketball icon LeBron James gets his way, NBA arenas and other sports venues around the country will be mega polling sites for the November general election.

James and his voting rights group, formed this spring with other black athletes and entertainers, are joining with other professional basketball leaders and Michigan’s top elections official to push for mega voting sites to accommodate in-person balloting amid the COVID-19 pandemic.

More Than A Vote, the James organization dedicated to maximizing Black turnout in November, shared its plans with The Associated Press on Wednesday after the Detroit Pistons became the second NBA franchise to announce plans to use its arena for voting later this year. In Georgia, Fulton County elections officials this week approved the Atlanta Hawks’ proposal to use State Farm Arena as a polling site. Plans call for the arena to serve any Fulton County voters during early voting and on Election Day, Nov. 3.

The idea, which comes after Kentucky used large facilities in its June 23 primary, is to use large spaces that allow for in-person voting while still enforcing social distancing guidelines. It also underscores the attention on the mechanics of voting amid the pandemic, with the intensity already reflected in both President Donald Trump and Democratic challenger Joe Biden warning that state and local officials have the power to “corrupt” the election.

Michigan Secretary of State Jocelyn Benson called her “partnership” with the Pistons an “blueprint for other teams and leagues seeking to advance our common goal of protecting access to the vote for all.”

Lloyd Pierce, head coach of the Atlanta Hawks, said the arrangement in his city ensures “high turnout” in a safe environment. Benson, Pierce and David Fizdale, former New York Knicks head coach, will advise NBA franchises and arena management entities around the country on how to replicate the existing deals.

The Milwaukee Bucks also confirmed they are willing to use their home arena as a voting site in the most populous city in the key battleground of Wisconsin.

The coordinated push is a turnabout, of sorts, in the often-partisan jousting over voting procedures.

A federal judge rejected their claims, and voting proceeded without the melee that some advocates had forecast.

Now, Benson, a Democrat, is pushing the arena model not as an example of potential voter suppression, but a way to fight it. “One of our greatest challenges in protecting voters’ access to democracy this November is identifying accessible locations where citizens can safely vote in person,” she said.

Amid COVID, that could outweigh potential logistical difficulties of large sites. Lines for such venues can still be long — just as with normal polling locations — as was seen in Lexington at some points on primary day. Voters also could face traffic jams or public transit hiccups given the number of people involved. General elections also have considerably larger turnout than primaries.

James’ group is officially nonpartisan. But the NBA star has been open about its emphasis on the Black community, where Trump faces intense opposition for his white identity politics. James has not endorsed Biden, but he endorsed Hillary Clinton over Trump in 2016.