“There are several things they could have done. They just wanted to go against the Governor. And now people and families are suffering from it. And they should feel ashamed,” says Union County Public Schools parent Jermatic Chambers.

Chambers says she is sad and scared after the news Tuesday. In a press release, a health department spokeswoman wrote, “Through case investigations, Public Health has identified 16 individuals who have tested positive for COVID-19 who attended the Marvin Ridge High School graduation. A portion of the individuals attended additional graduation-related gatherings not affiliated with Union County Public Schools, however the only common link among all of the positive individuals was the graduation ceremony.”

Chamber’s son graduated from another Union County high school this year, Porter Ridge, and she is worried. She says, “It’s gonna be more schools. Our county is the only one local that decided to go against (the Governor’s) orders.”

Governor Cooper’s Executive Order does not allow outside gatherings of more than 25 people. On May 29th, in a five to four split, the board voted to defy the order. Now ex-board member Travis Kiker told the board then, “Everybody needs to be aware that what we are voting on does violate this order.” 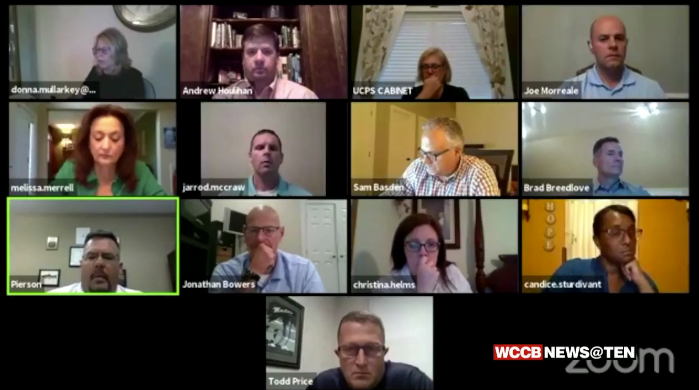 A Marvin Ridge High School teacher, who wants to remain anonymous out of fear of retribution from the school board, says of the COVID cluster news, “This is par for the course with this particular board. Their wanton flaunting of their willingness to skirt state regulations is a flagrant misuse of the trust citizens put in them. As a teacher in the system, something must be done to keep these board members from putting our students in harm way more than they already have.” 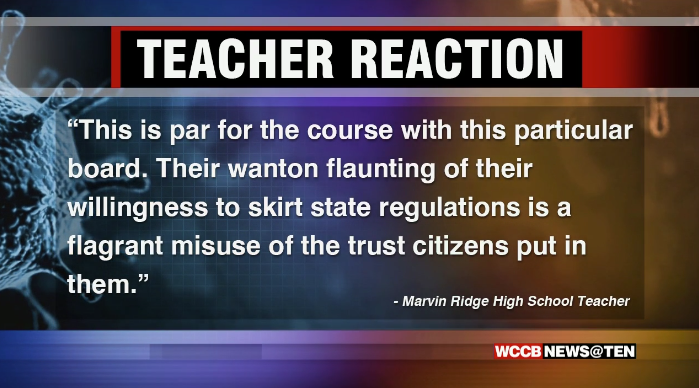 A Marvin Ridge parent, who also wants to remain anonymous, says, “The positive cases identified so far likely represent the tip of the iceberg. The school board members who voted in favor should be held in contempt and resign immediately.”

Chambers worries about how this board will handle the re-opening of schools this fall. She says, “Can we trust our board to make these decisions after this happened?”

Board members Melissa Merrell, Matt Helms, Gary Sides, Todd Price and Travis Kiker, who resigned last week after racist Facebook posts, voted to defy the Governor’s order. Merrell tells WCCB she stands by the board’s vote and suggests people got sick somewhere other than the ceremony. She also says, “…the county failed to connect the Graduation parties, banquets or beach trips as reported last week.”