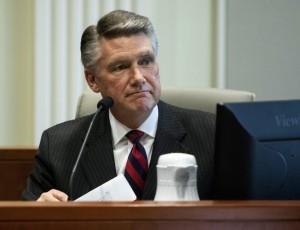 State and federal agencies spent more than a year investigating the involvement of Harris and his campaign in absentee ballot operations in Bladen County. Freeman told The Associated Press that her office decided against charging Harris after speaking last week with a key witness she declined to identify.

Harris told the AP in a phone interview that he’s grateful for the opportunity “to finally restore my reputation,” and didn’t rule out running for political office again someday.

Harris, a Baptist minister, got the most votes in the November 2018 election, but an investigation soon began into allegations centering around McCrae Dowless, who was hired for Harris’ campaign in Bladen County. Harris didn’t run in a state-ordered new election, which Republican Dan Bishop won in Sept. 2019.

Dowless and some of his workers, meanwhile, have been indicted on election-related charges in state court for activities in the 2016 and 2018 elections. These cases are pending, and Freeman’s statement says “investigators continue probing other areas of evidence.” Dowless also was indicted in April on federal charges of fraudulently receiving Social Security benefits while getting paid for political work.

Witnesses told state election officials that Dowless gathered hundreds of absentee ballots from Bladen County voters with the help of his assistants. Dowless’ workers testified at a state board hearing that they were directed to collect blank or incomplete ballots, forge signatures on them and even fill in votes for local candidates.

For months, Harris sought to be declared the November 2018 winner. Harris testified during the hearing and denied any knowledge of illegal practices by those working for his campaign, but he also asked for a new election, acknowledging the taint the evidence had on his 900-vote lead.

“Candidates for elected office have a duty to uphold the public’s faith by not only following the law, but by exercising sound judgment,” Freeman said in her statement, adding that “Harris’ decision to relinquish his seat and call for a new election in which he did not participate were important steps in restoring the confidence of the voters in District 9.”

“I told the voters on the 9th District that my campaign would fully cooperate with the process and that it would ultimately reveal insufficient evidence to overturn an election,” Harris said, adding he’s not been interviewed by any law enforcement. “I trust the investigators will continue to work so that North Carolina voters can be assured that their vote counts.”

In testimony during the 2019 board hearing, Harris’ son said he warned his parents about Dowless and didn’t trust him or his methods. John Harris said he thought Dowless lied and his parents believed him.

Mark Harris said Wednesday a number of elected officials who recommended Dowless to him also were apparently misled.

Harris, 54, was previously president of the North Carolina Baptist State Convention and chief pastor at First Baptist Church in Charlotte. Now the pastor at a Baptist church in Mooresville, north of Charlotte, Harris said he’s not cut off the idea of running for political office again someday because “I love this country too much.” He ran unsuccessfully for the U.S. Senate in 2014 and for Congress in 2016.