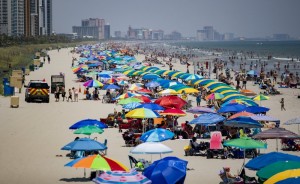 People fill the beach in North Myrtle Beach, S.C., Saturday, July 4 as coronavirus cases continue to surge. At least 41,413 people in South Carolina have tested positive for the coronavirus, and 787 have died, according to state health officials. (Josh Bell/The Sun News via AP)

COLUMBIA, S.C. — South Carolina’s unemployment picture has improved overall, with 20,000 people finding work and businesses reopening as they adjust to the COVID-19 pandemic.

But restaurants, hotels and other tourism businesses continue to struggle, having lost more jobs even in the height of the summer season, according to the August unemployment figures released Friday by the South Carolina Department of Employment and Workforce.

The unemployment rate in South Carolina dropped to 6.3% in August, down from 8.7% in July and 12.8% in April during the peak of the outbreak, the agency said.

The unemployment rate has recovered quicker in this downturn than the Great Recession, where the drop from the 11.7% peak in December 2009 to 6.3% took more than four years, agency director Dan Ellzey said.

“We are by no means back to normal in our state, but these milestones should be acknowledged and celebrated,” Ellzey said in a statement.

But the main unemployment number conceals troubling trends. South Carolina lost another 2,800 leisure and hospitality jobs from July to August as more hotels and restaurants struggled in the ongoing pandemic.

In the past year, almost 56,000 hospitality jobs have disappeared in South Carolina — about 20% of the jobs in the tourism industry that drives the state’s economy.

The unemployment rate in Horry County, which includes Myrtle Beach, was 8.2% in August, a significant fall from 11% in July, but far above the 3.1% recorded in August 2019 well before the pandemic started.

Tourism officials have spent the past two months telling lawmakers they don’t know what to expect next with the pandemic.

“We still have a lot of work to do to get our people back to work and get our economy back to full strength, but this is clear evidence that we’re on the right track and that should be encouraging news,” the governor said in a statement.