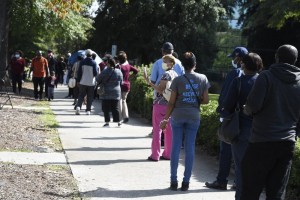 Voters wait in line outside the Richland County election office on the first day of in-person absentee voting in South Carolina on Monday, Oct. 5, 2020, in Columbia, S.C. A number of counties have polling places where people can vote almost like they would in person on Election Day, instead of having to mail in their absentee ballot. (AP Photo/Meg Kinnard)

COLUMBIA, S.C. — More than 23,000 absentee ballots were turned in Monday in South Carolina, the first day the state offered in-person absentee voting for the 2020 general election. according to the state Election Commission.

The number of votes already cast in the election jumped from nearly 18,500 at the end of last week to nearly 42,000 at the end of Monday, according to a commission report. About half of those votes were in-person absentee ballots, the commission said.

About 58% of the votes cast so far in the Nov. 3 election were cast by people who say they are white. The state’s registered voters are 70% white.

Many larger counties plan to open additional sites for in-person absentee voting this week or next week.

The South Carolina General Assembly passed a law allowing anyone to vote absentee in this November’s election because of COVID-19.

A requirement that a witness sign an absentee ballot sent back in the mail is back in place after a U.S. Supreme Court ruling late Monday overturned an appeals court ruling saying the signature wasn’t necessary because of the dangers in the pandemic.