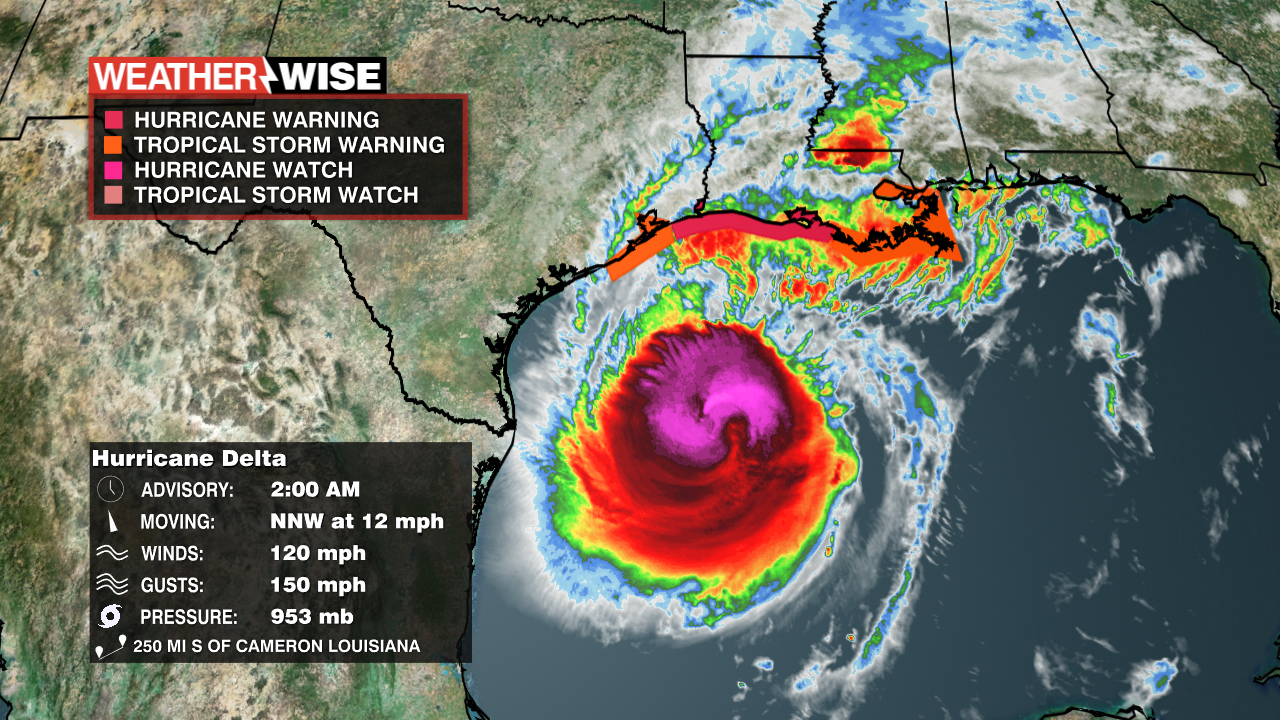 CHARLOTTE, N.C. — It’s starting to look like a given that we’ll see a second major hurricane landfall in Louisiana in just over a month’s time. Already bruised and battered from Laura coming ashore in late August, the Bayou State is batting down the hatches yet again as Hurricane Delta draws near. As of the 2 AM update from the National Hurricane Center (NHC), Delta is packing 120 mph at its core as it swirls to within 200 miles of the Louisiana coastline. Hurricane Delta is expected to come ashore as soon as Friday evening, bringing with it life-threatening wind, rain, and storm surge in its path.

Storm surge warnings for #Delta remain in effect for parts of the upper Texas, Louisiana, and Mississippi coasts. The highest surge (7-11 ft above ground level) is likely to be between the Rockefeller Wildlife Refuge and Morgan City, including Vermilion Bay. pic.twitter.com/ueTrB9NYa0

According to the NHC, Hurricane Delta will likely bring a storm surge of over 10 feet to parts of the Louisiana coast to go along with 6-10″ of rain from Lake Charles to Alexandria. Hurricane watches and warnings have been posted for a stretch of land between Houston and New Orleans. The system will quickly weaken after landfall before turning northeastward by Saturday afternoon and degenerating into a remnant low. 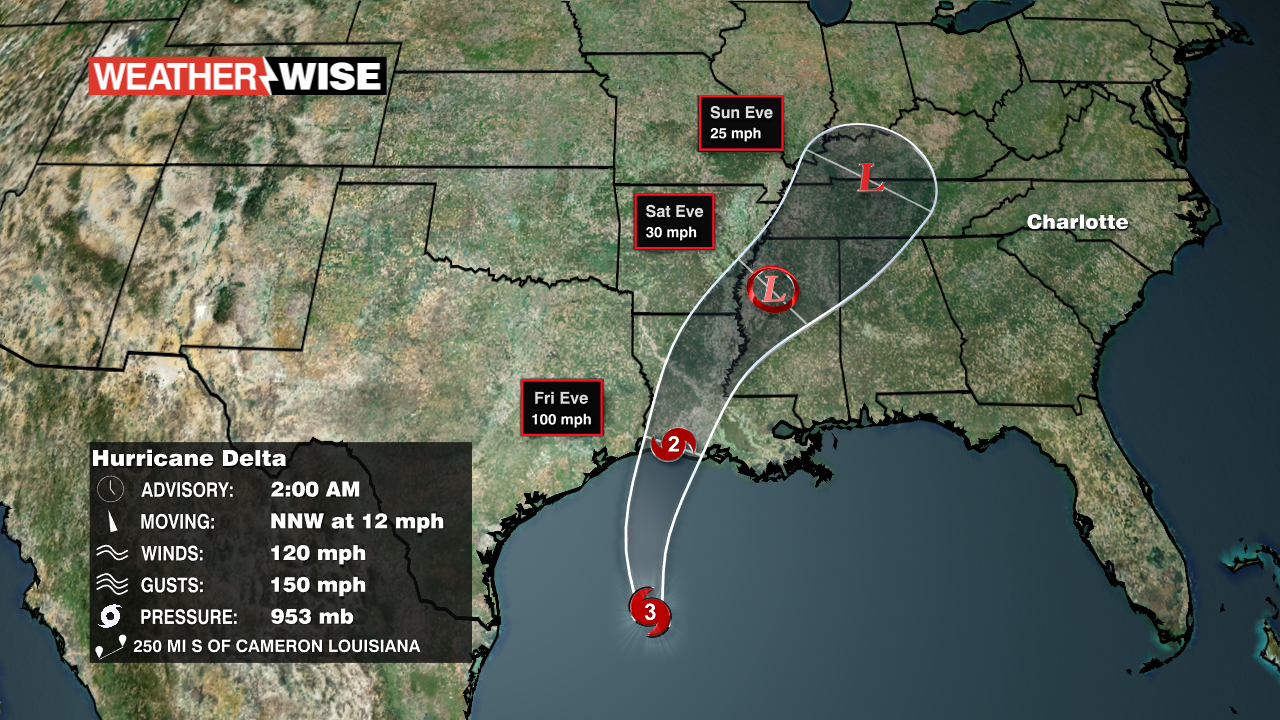 While impacts here in the Carolinas almost certainly won’t be as bad as what our friends in the Bayou State will see, heavy rain and occasionally gusty winds will blow into our area and stick around for much of the weekend ahead. It appears that 1-3″ of rain will fall across the WCCB Charlotte viewing area through Monday afternoon, with the highest totals expected north of I-40 and west of I-77. Wind gusts could approach 40-50 mph in the High Country, but most readings should remain well below that benchmark. Isolated-to-widely-scattered power outages may plague the western portions of the viewing area as heavy rain coupled with gusty winds will conspire to knock down trees and powerlines. Stay tuned to the latest from our weather team on Rising from 4:30 to 9 AM and the News at Ten and download our COIT WeatherWise app to get the latest forecasts for the weekend and beyond. 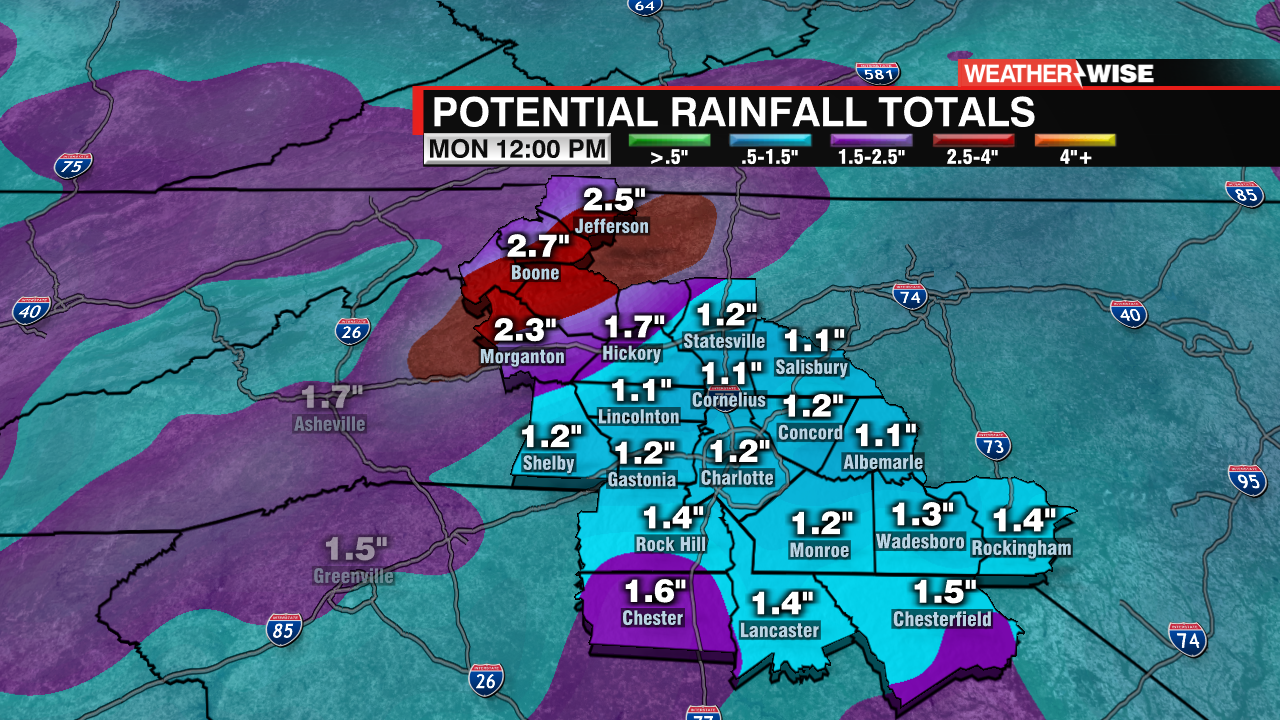