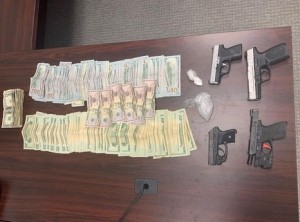 ALBEMARLE, N.C. — According to the Albemarle Police Department, four juveniles have been linked to multiple crimes involving stolen vehicles, drugs and possession of guns.

Police responded to South Morrow Avenue on Tuesday after a report of suspicious vehicles. When officers arrived they found three stolen vehicles in the parking lot of an apartment complex.

When officers approached the vehicles, several suspects, identified as four juveniles, ran away but were later located. It was soon discovered the three vehicles the suspects were hanging around were stolen with one having a stolen firearm inside, police say.

Albemarle police were able to obtain and execute a search warrant for East Main Street home where they located four additional handguns, along with 58 grams of heroin/fentanyl, 10.5 grams of marijuana, $18,768 in cash, and a 2008 Lincoln MKZ.

With the assistance of Juvenile Justice, juvenile petitions were filed on the juveniles, police say.