Catawba County deputies have identified and arrested a second suspect in connection with the Conover murder of a 28-year-old man that happened in October.

After an investigation, 34-year-old Sheala Diane Layell was indicted on a charge for Accessory After the Fact to Murder in connection with the Samuel Loza homicide case, according to a news release. She is now in custody and received a $75,000 secured bond. 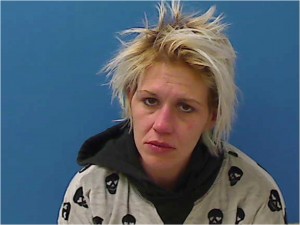 Tony Shook, who is still in custody under no bond, was also indicted on Monday for Murder, deputies say.

According to officials, the motive for this homicide appears to be narcotics related. No additional arrests are expected in this case at this time.

Catawba County deputies have charged a man with murder in the fatal shooting case of a 28-year-old man that happened in Conover Monday.

Deputies say Tony Shook was served arrest warrants charging him with murder in connection with the homicide of Samuel Loza on Tuesday. Shook is being held without bond.

Officers were looking into Alisha Looney as a person of interest in the case but after she was located by investigators it has been determined that Looney was not involved.

Investigators are still seeking a second suspect in this homicide investigation. Officers say the suspect is described as a white woman, around 20-30 years old, with blonde hair. This female was wearing a grey Calvin Klein hooded sweat shirt at the time the incident happened.

Anyone with information concerning this suspect and or this investigation is asked to contact the Catawba County Sheriff’s Office at 828-464-3112.

The incident happened around 3 a.m. at a White Tail Circle residence. When officers arrived at the location they found a man, identified as 28-year-old Samuel Antonio Hernandez Loza, dead inside the home due to a gunshot wound, deputies say.

The suspects fled the scene before law enforcement arrived but through an investigation deputies identified 54-year-old Tony Shook as a suspect in the Loza murder case.

Deputies say Shook has been charged with Murder. The murder warrant for his arrest was not served as of Monday evening.

The sheriff’s office also named Alisha Nicole Looney as a person of interest in this investigation. She is currently being searched for by Catawba County deputies to be questioned.

The motive for this homicide is currently unknown.

Anyone with information concerning Looney and or this investigation is asked to contact the Catawba County Sheriff’s Office at 828-464-3112.