RALEIGH, N.C. (News Release) – After getting off of work on Tuesday, “something” told Selena Wallace of Cherryville to stop and try her luck on a lottery ticket. That ticket ended up winning her the last $1 million Holiday Countdown top prize.

Wallace, a personal care assistant, purchased her winning $20 ticket from the Murphy USA on Lincolnton Highway in Cherryville.

“It was like something was telling me to go buy a ticket,” recalled Wallace. “I got the ticket and I put it in my purse.”

Once back home, Wallace started cooking dinner, her “famous chicken alfredo”, and remembered her ticket.

“I got to scratching the ticket and I saw two holidays and it had $1 million dollars,” she said. “I kept looking and I said, ‘No, that don’t seem right.’ I felt like I was having a heart attack! I just couldn’t believe it.”

Wallace claimed her prize Wednesday at lottery headquarters in Raleigh. She had the choice of taking the $1 million as an annuity of 20 payments of $50,000 a year or a lump sum of $600,000.

She chose the lump sum and took home $424,506 after required state and federal tax withholdings.

“I’m able to pay my daughter’s student loans off,” said Wallace of her plans for the prize money. “That was one of the major things I was worried about.”

Wallace also plans to use her winnings to care for her parents and buy a new house for herself. The rest, she said, will go into savings.

Holiday Countdown launched this month with three top prizes of $1 million. Wallace won the last top prize so the lottery will begin steps to end the game.

Ticket sales from scratch-offs make it possible for the lottery to raise more than $725 million per year for education. For details on how lottery funds have helped all of North Carolina’s 100 counties, click on the “Impact” section of the lottery’s website. 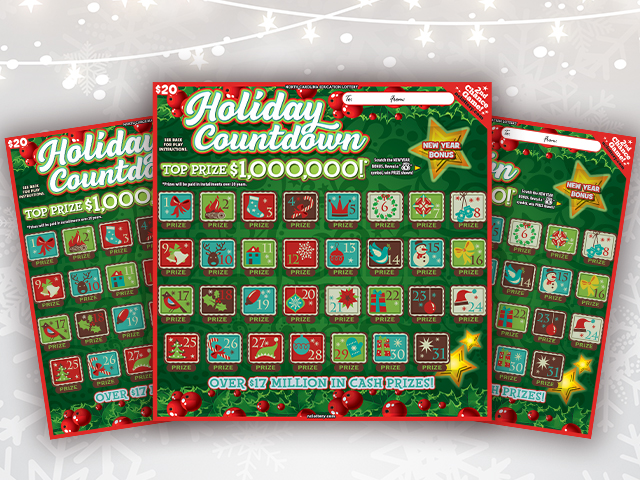