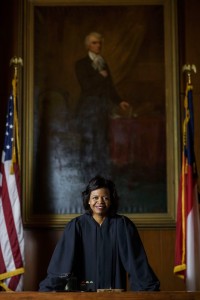 FILE – In this Feb. 13, 2019, file photo, Judge Cheri Beasley poses for a picture from the Chief Justice’s seat in a courtroom in Fayetteville, N.C. The North Carolina Supreme Court says it will remove the portrait of former Chief Justice Thomas Ruffin, background, from its courtroom. Ruffin owned slaves during the 1800s and defended slavery through his court rulings. (Melissa Sue Gerrits/The Fayetteville Observer via AP, File)

RALEIGH, N.C. — The North Carolina Supreme Court announced Tuesday that it will remove a portrait of a former chief justice from its courtroom who staunchly defended slavery and owned slaves himself.

Thomas Ruffin, a slave owner in the 1800s, believed an owner’s power over his slave was absolute. He once wrote in a court ruling that slaveholders should not be convicted for the assault or battery of an enslaved person.

The court’s decision to remove the portrait took note of Ruffin’s slave ownership and his rulings defending slavery. Its announcement said Ruffin was regarded by his contemporaries as “particularly brutal in his ownership of slaves.”

The decision followed a recommendation made last week by the Advisory Commission on Portraits, which the court formed in 2018 in response to calls for the portrait’s removal.

A smaller portrait of Ruffin was removed from an Orange County courthouse earlier this year, as was a statue of him from the entrance of the state Court of Appeals building. The appeals building was once named after him.

“It is important that our courtroom spaces convey the highest ideals of justice and that people who come before our Court feel comfortable knowing that they will be treated fairly,” Beasley wrote. She called the decision to remove the portrait “a tremendous reflection of the progress that has been made since the time Chief Justice Ruffin served on the Court.”

Ruffin served on the North Carolina Supreme Court from 1829 to 1852 and again from 1858 to 1859. He wrote an opinion that overturned the conviction of a slave owner, John Mann, for shooting in the back a slave named Lydia who fled after refusing the owner’s orders. Ruffin wrote that a slave’s obedience “is the consequence only of uncontrolled authority over the body.”