SALISBURY, N.C. —  A 19-year-old has been arrested and charged after one person was hurt in a drive-by shooting in Salisbury Monday morning.

The shooting happened around 10 a.m. on South Main Street, nearby Southern Motors, at Mooresville Road. When officers arrived they found a 24-year-old man at the car lot with a gunshot wound in the leg, according to police.

Police say a silver Cadillac CTS occupied with three men wearing black masks was passing a Silver Jeep Cherokee on Mooresville Road headed toward South Main Street. The rear passenger of the Cadillac was hanging out the window firing at the Jeep. The Jeep was struck several times.

The Cadillac then turned on Main Street, and then left onto Fulton Street. A black pickup truck at Southern Motors was struck in the tailgate and back window.

The victim was next to the black pickup when he was struck in the leg. Police say the victim was transported to Rowan Regional hospital, treated, and released.

The Salisbury Police Department announced on Tuesday that the identified suspect in the case, Achazyah McCombs, had been charged with Assault with a deadly weapon inflicting serious injury and Discharging a firearm into an occupied vehicle. 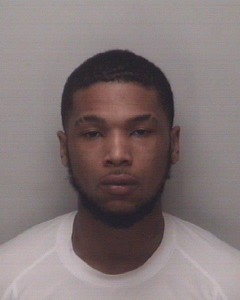 He was placed in the Rowan County Jail under a $75,000 secured bond.