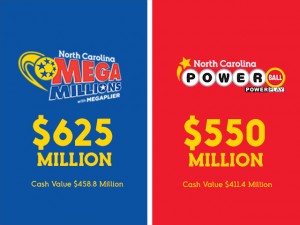 North Carolinians also have a chance at a big jackpot win in Wednesday’s Powerball drawing. The jackpot stands at an estimated $550 million as an annuity prize, or $411.4 million cash. If won, this would be the 9th largest jackpot in Powerball game history. The odds of winning the Powerball jackpot are 1 in 292 million.

Wednesday’s drawing coincides with the fifth anniversary of Powerball’s world record $1.586 billion jackpot that was hit on January 13, 2016.

“This is only the second time in history of the games that both jackpots exceeded $500 million at the same time,” said Mark Michalko, executive director of the N.C. Education Lottery. “It’s exciting. Remember to play smart, as it only takes one ticket to win, and play safe at stores where lottery tickets are sold.”

In addition to the jackpot prize, players can win lower-tier prizes of up to $2 million with Powerball and up to $5 million with Mega Millions. Some recent big prizes won by North Carolinians include:

Since both jackpots started rolling in September, tickets sales have raised an estimated $28.6 million for education programs in North Carolina.

Players can buy $2 Powerball or Mega Millions tickets at any lottery retail location, through Online Play on the lottery’s website, www.nclottery.com, or by using the NC Lottery Official Mobile App.

Ticket sales from draw games make it possible for the lottery to raise more than $725 million a year for education. For details on how lottery funds have made a difference in all of North Carolina’s 100 counties, click on the “Impact” section of the lottery’s website.