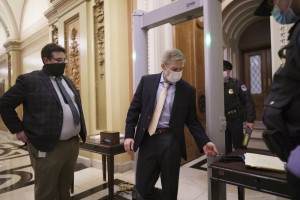 Rep. Jim Jordan, R-Ohio, an ally of President Donald Trump, passes through a metal detector as he enters the House chamber, new security measures put into place after a mob loyal to Trump stormed the Capitol, in Washington, Tuesday, Jan. 12, 2021. Democrats are set to pass a resolution calling on Vice President Mike Pence to invoke constitutional authority under the 25th Amendment to oust Trump. (AP Photo/J. Scott Applewhite)

President Donald Trump says he opposes violence in a statement read on the House floor as members debate impeaching him for his role in fomenting the violent insurrection at the Capitol last week.

Trump says in a statement: “In light of reports of more demonstrations, I urge that there must be NO violence, NO lawbreaking and NO vandalism of any kind.” Trump adds: “That is not what I stand for, and it is not what America stands for. I call on ALL Americans to help ease tensions and calm tempers.”

Trump is on the verge of being impeached for a second time in a fast-moving House vote, just a week after he encouraged loyalists to “fight like hell” against election results and then a mob of his supporters stormed the U.S. Capitol. Five people died, including a U.S. Capitol Police officer.

HERE’S WHAT YOU NEED TO KNOW ABOUT THE FALLOUT FROM THE RIOTING AT THE CAPITOL:

The House plans the unprecedented vote Wednesday to impeach President Donald Trump for a second time. The move comes one week after he encouraged a mob of loyalists to “fight like hell” against election results and the Capitol became the target of a deadly siege.