President Joe Biden’s inauguration was a major talking point Wednesday but according to the internet Bernie Sanders might have stole the show.

The 79-year-old Vermont senator quickly became a meme on social media after he was seen pictured at the event in a parka, mask and multicolored hand-knit mittens. Sanders was pictured sitting alone in a folding chair with his arms and legs crossed. 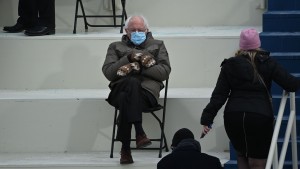 The picture has now become iconic as he has been photoshopped into shows like the Golden Girls, album covers, sidelines of football games and has even made a special appearance on the WCCB Rising.

Locally, businesses have even joined in on the fun with Sanders visiting their location while sitting in his now well-known pose.

Even Bernie Sanders is unhappy with our current shelter.

Posted by Humane Society of Charlotte on Thursday, January 21, 2021

Spotlight on Black Women Owned Business in CLT: Best of Both Souls

'Round Town With Rising: Ballantyne

'Round Town with Rising: NoDa

'Round Town with Rising: Mint Hill