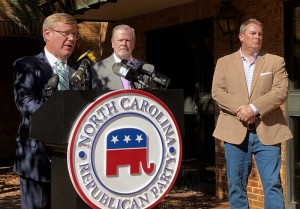 FILE – North Carolina House Speaker Tim Moore, left, R-Cleveland, speaks to reporters, with Senate leader Phil Berger, R-Rockingham, and House Majority Leader John Bell, right, R-Wayne, at a news conference on Wednesday, Nov. 4, 2020 at state GOP headquarters in Raleigh, N.C., to discuss Election Day results. North Carolina Democrats were hoping this November they would break the backs of Republicans, who, after dominating state politics for much of the past decade, saw their power erode in the 2016 and 2018 elections. Instead, state Democrats had little to tout after Election Day beyond Gov. Roy Cooper’s close yet expected reelection, a narrow victory for Attorney General Josh Stein, and picking up two U.S. House seats largely handed to them by redistricting in 2019. (AP Photo/Gary D. Robertson, FILE).

RALEIGH, N.C. — North Carolina’s top elections administrator on Tuesday urged state lawmakers to move all of this year’s municipal elections to 2022 and bump back next year’s primaries from March to May due to delayed Census data.

Census numbers play a crucial role in how legislative districts are redrawn every decade. But even though the data was supposed to be delivered by next month, the federal government does not expect to have it ready to be released until September because of delays caused by the coronavirus pandemic.

Karen Brinson Bell, executive director of the North Carolina State Board of Elections, cited those setbacks as the driving force behind her recommendation to postpone the elections.

She noted that 62 of the more than 500 municipalities across the state need the Census data because candidates submit paperwork or voters cast ballots based on their specific ward or district. While it’s possible for many of the remaining local governments that do not require districts or wards to go forward without the Census data, Bell called on lawmakers to follow her advice in order to address redistricting and avoid confusing voters.

“It is very difficult for voters to understand why one municipality would be having an election, while another is not, especially when they’re accustomed to those elections being held at the same time,” Bell said.

She also noted it’s unlikely redistricting would be completed in time for the December filing deadline ahead of the March 2022 primary. Every 10 years, states are tasked with creating new maps for state legislative and congressional races. Because of the delayed Census, Bell is asking leaders to endorse her 2022 recommendations for a May 3 primary, July 12 runoff primary and Nov. 8 general election. “We would propose that the municipal elections coincide with those election dates.”

The 2022 primaries include bids for U.S. Senate and House, judicial races and state legislative seats.

The Republican-controlled General Assembly has the ultimate decision on when to hold the elections, and the state elections board is tasked with carrying out the plan.

Some state elections officials are concerned with the proposed overhaul to the voting timetable, particularly in places where updated Census data is not needed to carry out local contests.

“It causes me some heartburn to think about making a sweeping change that’s going to affect the election schedule proposal,” said Stacy Eggers, a Republican member on the state board of elections.

Damon Circosta, the Democratic chairman of the board, said he shares Eggers’ worries but added, “There’s really no good solution, and I trust the General Assembly will do what they need to do to give us the direction we need.”