Hornets Guard Is The Fifth Rookie In Franchise History To Win The Award Twice. 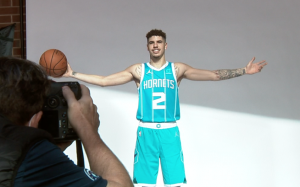 During the Hornets 13 games played in February, Ball helped lead the Hornets to a 7-6 record (.538), tied for the eighth best winning percentage in the Eastern Conference. Ball averaged 20.1 points, 6.2 rebounds, 6.7 assists and 1.7 steals per game, leading all rookies in points and assists per game second in rebounds and third in steals per game among rookies.

Ball set a career-high with 34 points and added eight assists and four rebounds with zero turnovers on Feb. 5 vs. Utah. Ball became the youngest player in NBA history with 30 points and five assists with no turnovers and just the second teenager. Ball is just the third rookie in franchise history with 30 points and five assists as his 34 points are tied for the fifth most by a rookie in a single game.

On Feb. 8 vs. Houston, the first-year guard scored 24 points on 7-of-18 shooting, all 3-pointers, to go with 10 assists and seven boards making him just the ninth rookie in NBA history with at least 20 points, 10 assists and five rebounds while making five 3-point field goals. Ball is just one of three rookies to total 20 points, 10 assists and five rebounds with seven made 3s along with Jason Kidd and Stephen Curry as he is the youngest player in NBA history with seven made 3-pointers in a game.