Gaston County Police say they have charged a third suspect in the February double homicide case that left two people dead and another injured. One suspect in the case is still on the run and is considered dangerous.

The police department said Monday that 19-year-old Darrick Johnson, of Gastonia, was charged and arrested with the assistance of the United States Marshall Service Taskforce after an investigation.

Police say 24-year-old Charlie Stiles of Gastonia, the second person identified and charged in the homicide case, was arrested and charged on March 1.

Warrants remain outstanding for the first suspect charged in the case identified as Jordan Cameron Moses. The warrants are for two counts of 1st degree murder and 1 count of attempted 1st degree murder. Police say Moses is considered armed and dangerous.

The Gaston County Police encourages anyone with information about this incident to contact Detective M. Rheinson at 704-866-3320 or Crimestoppers at 704-861-8000.

Police say a man is wanted in connection to a Gaston County shooting that left two people dead and another person seriously injured Monday night. 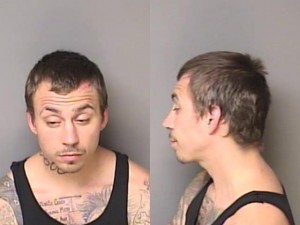 Moses is wanted in connection to the fatal shooting and is said to be “considered armed and dangerous,” according to police.

The Gaston County Police Department advises the public to not interact with Moses and instead are encouraged to contact 911.

According to Gaston County Police, the shooting happened around 7:30 p.m. on Woodleaf Drive near Gastonia.

When officers arrived at the scene they found 50-year-old Christopher Lee Brooks dead from a gunshot wound.

Two other victims were located at the scene and transported to the hospital. Both victims were said to be in critical condition.

One of the two victims that were transported to the hospital, identified as 54-year-old Matthew Christopher Allison, died due to his injuries Tuesday afternoon, according to police.

There is no additional information on the third victim.

The Gaston County Police encourages anyone with information about this incident to contact Detective M. Rheinson at 704-866-3320 or Crimestoppers at 704-861-8000.