Family: 7-Year-Old Girl Injured In Shooting Improving, Questions Why She Was Shot

CHARLOTTE, N.C. — A 7-year-old girl is improving after she was shot Tuesday while playing with friends.  CMPD says Zionna was caught in the crossfire between two groups who were firing at each other on Marble Street.  Police arrested three people in connection with the case.

Zionna’s grandmother says the little girl has a lot of questions about why she was shot.

“She said, ‘why he shoot me?  I will see him and I’m gonna ask him why did you shoot me?” says Chandra Brown. 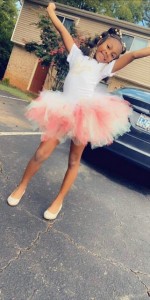 Doctors removed a bullet from the child’s body.  Her family says she’s alert, and hasn’t cried once since being admitted to the hospital.  They’re praying for her speedy recovery.

Ministers and community activists gathered a mile away from where Zionna was shot to pray for peace on this Good Friday, the start of the Easter Holiday weekend.  Two other teens were shot on Hovis Road hours before Zionna was shot.

Detectives say 20-year-old Alvin Steele is charged with assault with a deadly weapon with intent to kill or inflict serious injury and felony conspiracy for his involvement in this case.

Police say 23-year-old Shiodon Shipp has also been charged in this case with possession of a firearm by a convicted felon.

CHARLOTTE — A seven year-old girl was shot in the middle of a Northwest Charlotte neighborhood Tuesday night and now three suspects are behind bars.

The shooting happened around 7 p.m. on Marble Street.  CMPD says two groups opened fire on each other and a little girl was hit.  She was rushed to Atrium Health and was listed in stable condition.

CMPD Police Chief Johnny Jennings held a community conversation at Hoskins Avenue Baptist Church Wednesday afternoon.  During the conversation, Jennings confirmed that three suspects had been arrested for the shooting.

Police believe the two groups could be tied to another shooting that happened just a few blocks away on Hovis Road.  Two juveniles were shot there earlier in the day.  Click HERE for more details on that case.  We’re told they have life threatening injuries.

A neighbor told WCCB News she heard all the gunshots.  She and her family laid on the floor to protect themselves.

CMPD spent hours on the scene talking to witnesses and searching for clues.  They say they have active leads in the shooting.