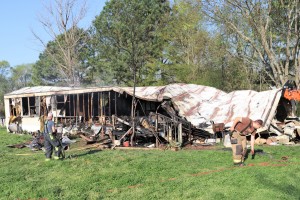 Crews were dispatched to the Ervin Lane home in Hiddenite after receiving a call around 6 a.m. about an explosion or a fire. When the Hiddenite Fire Department arrived they found a mobile home fully engulfed by flames.

Upon the fire being put out the Alexander County Fire Marshal Mark Earle said there was one death as a result of the fire. Earle also stated that there was no indication of an explosion, but said the mobile home is a total loss.

Investigators are working to determine the cause of the fire and to identify the victim.