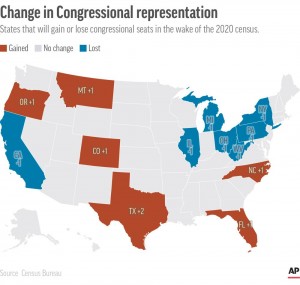 RALEIGH, N.C. — North Carolina will gain another seat in Congress for the next 10 years, the U.S. Census Bureau announced Monday, the result of a steadily growing population as people arrive for jobs and retirement.

The additional U.S. House seat, the 14th for North Carolina, marks the third time in the past four census cycles that the state will have increased the size of its congressional delegation. North Carolina received a 12th seat after the 1990 census and another after the 2000 release.

Rebecca Tippett, director of Carolina Demography, a research consulting group affiliated with the University of North Carolina at Chapel Hill.

The population distribution data needed for redistricting won’t be available until late summer or fall. But based on estimated population growth, Tippett said a 14th seat would likely be drawn in an urban or suburban area within the Piedmont crescent — an area stretching from Charlotte north and east to Greensboro and Raleigh.

The region’s population growth has far outpaced rural and eastern North Carolina, which could see their influence decline.

The General Assembly redrew the congressional map in late 2019 because state judges declared that it likely included unlawful partisan gerrymanders favoring the GOP. The new boundaries shifted Greensboro-area and Raleigh-area districts to seats favoring Democrats. Now the state House and Senate — still in Republican control — will redraw the map again.

Redistricting maps aren’t subject to a veto by Democratic Gov. Roy Cooper. But any map approved by the legislature is likely to be challenged in court by other Democrats, whether on partisan or racial grounds.

Republicans might find it difficult to create a new 14th district in the Piedmont that favors their party and passes legal muster, especially as the politics and voter preferences within the region’s largest cities — Charlotte, Raleigh, Greensboro and Durham among them — are shifting to the left.

Tippett said North Carolina’s population growth is driven by people who arrive for work or to attend college and then remain after graduation. Retirees also are flocking to the state, as well as baby boomers from the Northeast and Midwest who want to live closer to adult children already in North Carolina, she said. Others are attracted by the temperate climate and relatively affordable home prices.

“We continue to be a place where people move here from other places and countries, and we have more births than deaths,” Tippett said.

Mecklenburg County’s growth is linked to Charlotte and the area’s banking, airline and other corporate hubs. Wake County, home of Raleigh, has been historically connected to state government, but the continued technology sector growth associated with Research Triangle Park has diversified the county’s economy.

Suburban and exurban counties near Mecklenburg and Wake resumed robust population increases in the late 2010s after slowing following the 2008 recession, Tippett said.