Alt-Pop Trio COIN To Perform At Fillmore On December 2nd

The band will be taking their electrifying live show to over 30+ cities across North America and is set to kick off on October 26th in Birmingham, AL at the Iron City Music Hall and wrap on December 19th in Baltimore, MD at Baltimore Sound Stage with Valley and mazie set to open on select dates. See full routing below!

Fans can purchase tickets before the general public beginning on April 27th at 12pm EDT, with the venue presales beginning on April 29th at 12pm local time. Tickets will go on sale to the general public beginning Friday, April 30th at 9am local time. Additionally, each show will have a VIP experience available for fans to buy. Click HERE to purchase tickets and for more info.

Last week, COIN released their newest single “How It Feels.” The single is the first off their third and final installment to their mood-based project Rainbow MixTape. Click HERE to listen!

COIN unveiled the Green-Blue EP, marking the second installment off the mood-based trilogy Rainbow MixTape, last month, The 4-track project, which is out now on all digital platforms, debuted on Spotify’s Top 10 US Album Debut’s chart in its first weekend. The EP includes the tracks “Sagittarius Superstar” featuring Faye Webster, “Sprite,” “Turnaround” and “Earth To God.”

The series Rainbow MixTape trilogy, which has already surpassed over 10 million streams, is intended to conceptualize the mood represented by the colors in the title. Indigo-Violet, the first installment released at the end of last year, is a four-song collection of dynamic alternative rock-pop tracks showcasing the band’s versatility.

Rainbow Mixtape is the latest from the group since their album Dreamland, released in early 2020. Dreamland has since surpassed 100 million streams to date and was the first release from COIN’s label property Committee for Sound & Mind which is a global partnership with AWAL. 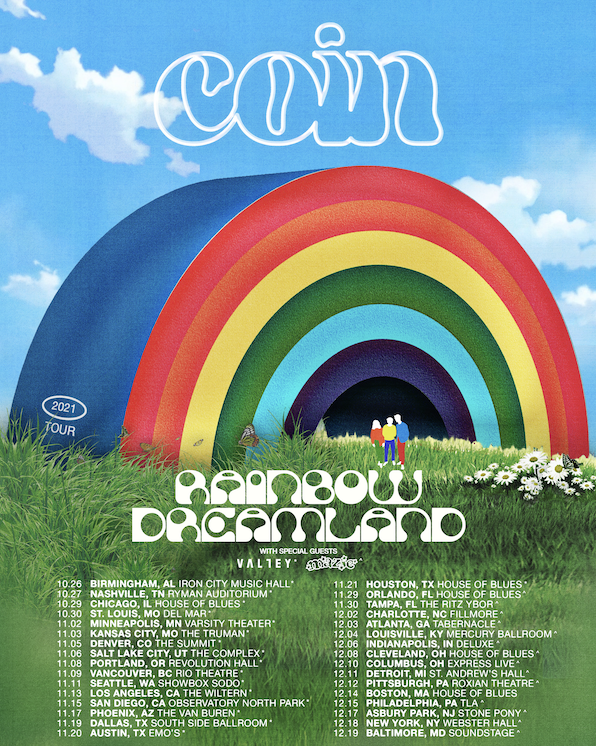