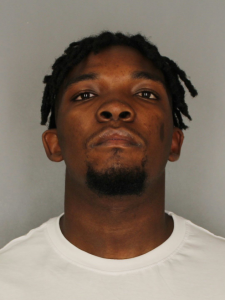 Police responded to Willow Wood Lane around 12:30 a.m. in reference to a shooting into a vehicle.

Officers were notified the victims left the scene and was driving to the Rock Hill Law Center. When officers located the victim’s car they observed damage caused by the shooting. Police say no one was injured during the shooting.

A witness stated that they saw a white vehicle speed off after the incident along with a description of the suspect.

When officers arrived at the scene, they witnessed a white Nissan speeding away and driving recklessly and attempted to stop the vehicle, however the driver sped away. The Nissan was located a short time later on Cherry Street.

The vehicle and driver, identified as Marveon Mobley, matched the description given by the victims and witness. Mobley was taken into custody and transported to the Rock Hill Jail.

According to police, Mobley was charged with two counts of assault and battery of a high and aggravated nature and reckless driving.