New quarterback Sam Darnold won’t have to wait long to get revenge on his former team, the 2021 season opens up at home on September 9th against the New York Jets.

The only primetime game on the schedule is the Week 3 Thursday night game at Houston.

The Panthers bye comes late in the season, in week 13, but it could be a good thing because the final stretch is tough. Four of the Panthers final 5 games are against NFC South opponents, in addition to a late December game at Buffalo – something that head coach Matt Rhule noticed right away.

Panthers single game tickets are now on sale to the general public here. 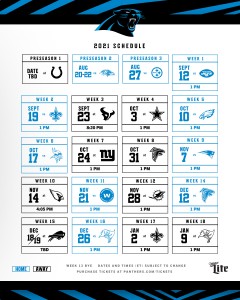