CONCORD, N.C. (News Release) – Earlier this week, Coca-Cola Racing Family driver Joey Logano met virtually with troops from American Forces Network Pacific and the U.S. Army 38th Air Defense Artillery Brigade from Japan, as part of Charlotte Motor Speedway’s virtual Mission 600. As a prelude to the 62nd running of the Coca-Cola 600 on Memorial Day Weekend, Mission 600 was designed to honor the men and women of the U.S. Armed Forces by pairing drivers with military bases to educate the NASCAR community about the day-to-day lives of the men and women who serve. 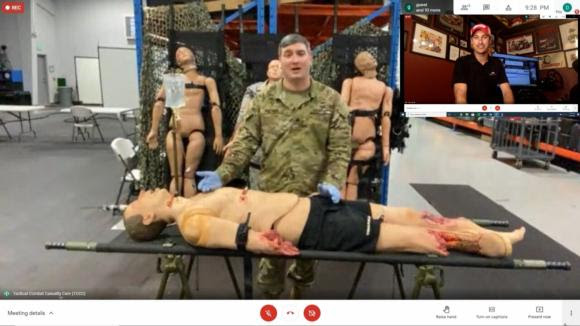 While the traditional Mission 600 connected drivers with regional military bases, the ongoing pandemic shifted plans to a virtual video teleconference. The virtual opportunity opened the door for Logano to spend nearly an hour with troops currently based 6,800 miles away, in Japan.

“When you think of what Mission 600 is doing, it’s shining a light on what our U.S. military is doing for us citizens every single day, whether you know it or not” Logano said. “Memorial Day is a very special day for a lot of reasons. It’s always a good time to remember what the military has done for us in the past, obviously, but what is going on right now. It’s so easy for us to live in our own little world and worry about our own little problems. It’s refreshing to take a step back and understand what these men and women are doing… They don’t even know me and they’re willing to put their lives on the line for me.”

Following the military demonstrations, Logano shared some of the tools of the trade that he uses to keep himself sharp and safe in his racing career, including his iRacing simulator, fire suit, Hans device and race helmet.

At the conclusion of the visit, Logano asked and fielded questions from the units, which ranged from radio communications technology to shared connections in his hometown in Connecticut and Bristol, Tenn.

“I just want to thank everyone that is on this call that has served in our military or is serving in the military… I wish I could shake everybody’s hand right now,” Logano said. “It’s one of those things that I just cannot fathom in my mind what it would be like in some of these combat moments.”