Despite Pandemic, Mission 600 Rolls On For Fourth Year In Advance Of Coca-Cola 600 At Charlotte Motor Speedway 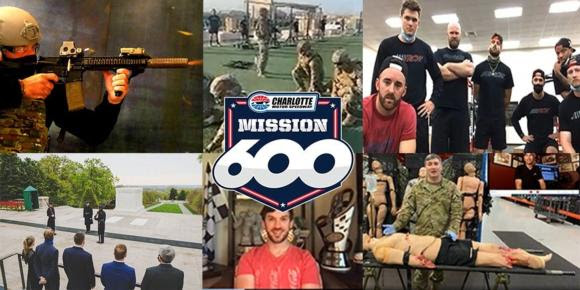 CONCORD, N.C. (News Release) – For the fourth consecutive year, Mission 600 has been accomplished in advance of the 62nd running of the Coca-Cola 600 on Memorial Day Weekend at Charlotte Motor Speedway. Designed to honor the men and women of the U.S. Armed Forces, this year’s Mission 600 paired defending Coca-Cola 600 winner Brad Keselowski and Coca-Cola Family Racing drivers Daniel Suarez, Austin Dillon, Ryan Newman and Joey Logano with military bases to educate the NASCAR community about the day-to-day lives of the men and women who serve. This year’s campaign included a mix of in-person and virtual visits and marked the first time Mission 600 went international with Dillon visiting with forces in Kuwait and Logano talking to two units from Japan.

“Hosting the Coca-Cola 600 on Memorial Day Weekend and working to bring NASCAR drivers and military bases together through Mission 600 is just a small way we pay tribute to the men and women who sacrifice so much to protect our freedoms each and every day,” said Charlotte Motor Speedway Executive Vice President and General Manager Greg Walter. “It’s such an honor to have the opportunity to learn a little bit about their lives and see how it compares to that of NASCAR drivers.”

This year’s mission centered around common themes between NASCAR and the military, such as teamwork, simulators and tools of the trade to help connect the troops with drivers and shed a light for NASCAR fans on the day-to-day lives of the military.

Team Penske driver Keselowski visited Arlington National Cemetery, where he enjoyed a private viewing of artifacts that paint the rich history of Arlington National Cemetery in the Memorial Display Room and watched a changing-of-the-guard ceremony at the iconic Tomb of the Unknown Soldier. Later, he visited the gravesite of President John F. Kennedy and ended the day with a private tour of the Pentagon.

“We’re here to recognize service men and service women who made the ultimate sacrifice for our country, which is a lot of what Memorial Day is all about,” Keselowski said. “Of course for us here in NASCAR, Memorial Day Weekend is about the Coca-Cola 600 and going out and running the longest race of the year, but we want to think of it a little deeper than that. With respect to that, we’re trying to start a new tradition here where the defending race winner comes to Arlington to show support for our country and for our military and really reflects on Memorial Day. It’s a very somber experience. It’s very humbling.”

Suarez spent time visiting with sailors aboard U.S. Coast Guard Cutter Richard Snyder during a virtual tour. During the online exchange, Suarez met commanding officer Lt. Greg Bredariol and his crew for a tour of the 154-foot Fast Response Cutter, which is based in Atlantic Beach, N.C. Sailors highlighted the state-of-the-art ship’s defense system and gave Suarez a tour of the ship’s bridge and galley before he fielded questions from the crew. Following his tour, Suarez shared some of his training regime that keeps him prepared and focused behind the wheel of his Trackhouse Racing Chevrolet, including putting time in on his iRacing simulator and maintaining a stringent workout and diet routine.

“For someone like me, coming from Mexico and having all these amazing benefits that this country enjoys thanks to you guys – our freedom, our safety – it feels amazing,” Suarez told the sailors after the visit. “If I ever go far into the ocean, I want you guys going with me. I wouldn’t take anyone else.”

Dillon and his Richard Childress Racing pit crew traded high-intensity workout routines with soldiers from U.S. Army Central Kuwait. The virtual gathering brought the two groups together on common ground despite physically being more than 6,800 miles apart. Members of the U.S. Army Central Kuwait demonstrated several exercises that are part of Army Combat Fitness Training, including deadlifts, power throws, sprint/drag/carry drills, among others. The unit then highlighted how those drills help prepare them for real-world scenarios on the battlefield. Following the military demonstrations, RCR strength and conditioning coach Jackson Meadows led Dillon and the No. 3 pit crew in a series of upper body workouts to show the soldiers how race teams use plyometric exercises to prepare themselves for the rigors of a pit stop.

“It’s awesome to see a lot of the workouts and how they apply to what they do,” said Dillon. “When we get in the gym and pit stop practice, all (my) guys are doing similar things to be the best they can be at their job.”

Newman visited Camp Lejeune to learn from and train alongside members of the U.S. Marine Corps Forces, Special Operations Command (MARSOC). The Roush Fenway Racing driver observed a demonstration at MARSOC’s David M. Sonka Multi-Purpose Canine Facility, featuring a group of highly trained dogs whose core capabilities range from explosive detection to tracking and protection. Newman also had the opportunity to fire a Glock-19 pistol and a powerful M4A1 rifle on the MARSOC firing range. The day wrapped up with a demonstration of equipment the unit would use to defuse an explosive device.

“It’s special, just to be close and in contact and hear the stories of the Marines. That’s what’s really special to me,” Newman said. “What hit me the most was the emotional side of the canine unit and the memorial to the people and the dogs that didn’t make it – what happens when we fight for our freedom… it’s important for me to pay attention, to spread the word and to make people understand because I know that I have taken a lot for granted when it comes to how and what goes into fighting for our freedom.”

Logano met virtually with troops from American Forces Network Pacific and the U.S. Army 38th Air Defense Artillery Brigade from Japan. During the visit, the U.S. Army’s 38th Air Defense Artillery Brigade showcased simulated live-fire training capabilities on a state-of-the-art Engagement Skills Trainer II, which facilitates marksmanship and judgmental escalation-of-force exercises for individuals and squads. Troops from the U.S. Army Medical Department Activity-Japan used lifelike mannequins called Tactical Combat Casualty Exportables to demonstrate how they train to administer emergency aid in the field. Following the military demonstrations, the Team Penske driver shared some of the tools of the trade that he uses to keep himself sharp and safe in his racing career, including his iRacing simulator, fire suit, Hans device and race helmet.

“When you think of what Mission 600 is doing, it’s shining a light on what our U.S. military is doing for us citizens every single day, whether you know it or not,” said Logano. “Memorial Day is a very special day for a lot of reasons. It’s always a good time to remember what the military has done for us in the past, obviously, but what is going on right now. It’s so easy for us to live in our own little world and worry about our own little problems. It’s refreshing to take a step back and understand what these men and women are doing…They don’t even know me and they’re willing to put their lives on the line for me.”