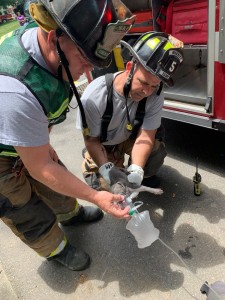 CHARLOTTE, N.C. – Charlotte firefighters saved a puppy from a house fire in Charlotte on Saturday afternoon.

Three adults and six children were also displaced in the fire that broke out around 12:30 p.m. on Winchester Street.

Firefighters say they responded to a home with heavy fire showing. 23 firefighters had the fire under control in 10 minutes.

Investigators say the fire was accidental and started in a bedroom closet.

No injuries were reported and the fire caused an estimated $45,000 in damages.