STATESVILLE, N.C. — A 8-year-old girl was killed and two other children were hurt after two separate drive-by shootings in Statesville Monday night.

Officers responded to Wilson Lee Boulevard around 7 p.m. after reports of a shooting. When police arrived they found two children, an 8-year-old girl and 7-year-old boy, who had been shot.

The children were transported to the hospital to be treated.  8-year-old Ah’Miyahh Howell died due to her injuries, her 7-year-old cousin, Tariq Lowery, who was shot in the leg, is being treated at the hospital.

Witnesses told officers that someone driving a white Mercedes was heading southbound on Wilson Lee Boulevard, near Newbern Avenue.

While the Statesville Police Department was investigating the drive-by shooting, officers heard gunshots around 8:30 p.m. and responded to Newbern Avenue, located about 3 blocks away.  Police found 10-year-old Maliki Ramseur suffering from a gunshot wound. Police loaded him up in one of their cruisers and rushed him to the hospital.  He spoke to WCCB News from his hospital bed.

“My back hurts a little bit.  Feeling a little bad,” he said.

His mother told us she is thankful her son is alive, but she feels horrible over the death of Miyah.

Witnesses told police the shooting suspect from Newbern Avenue was inside a white Honda Accord.

The police department is actively investigating the shooting.  The SBI, the ATF, and the U.S. Marshals were all on the scene assisting in the investigation.

Tuesday, family and friends gathered in Statesville for a candlelight vigil praying police will find the people responsible for such a horrific crime.

“I want them to catch whoever did this because my niece didn’t deserve none of this,” says Candra Howell, the victims’ aunt.

Ah’Miyahh Howell’s funeral will be held at 2 p.m. on Saturday, July 3rd at the Cove Church in Statesville.

Howell’s family is currently collecting donations through a GoFundMe here to help cover funeral costs. Her family will also host a Family Fundraiser Cookout at Kimbrough Park in Statesville on Monday, July 5th from 1 p.m. to 5 p.m. 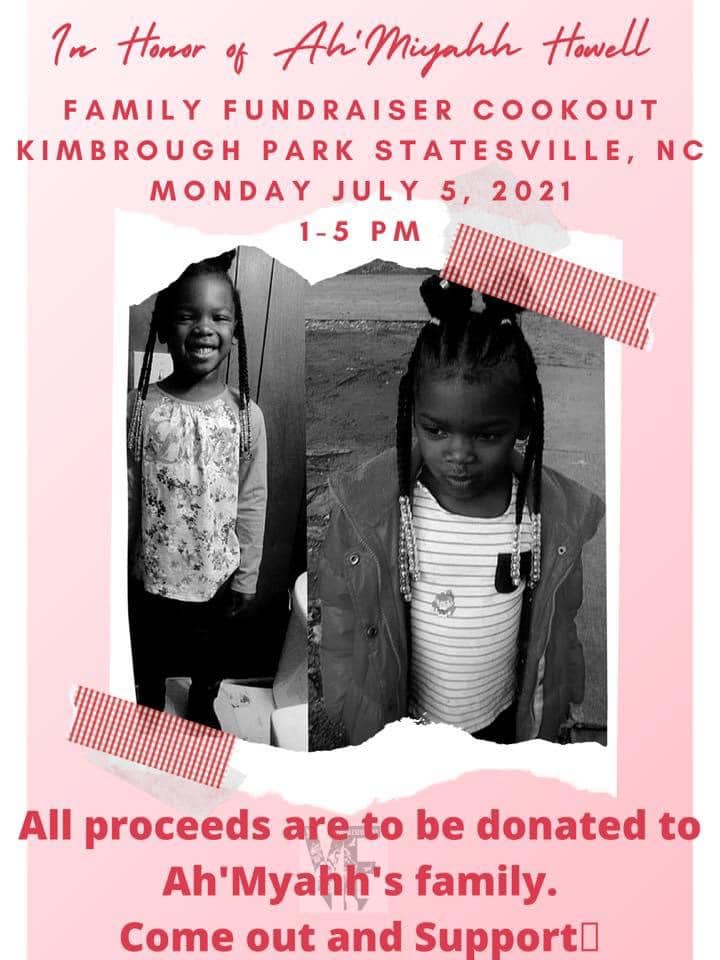 If anyone has more information about this crime, call Statesville Police.