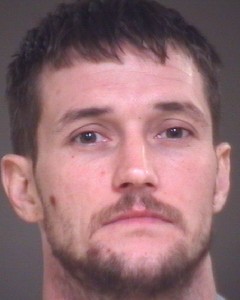 LINCOLNTON, N.C. — A 34-year-old Lincolnton man was arrested Monday after hiding from officers in the ceiling of a Denver convenience store.

Deputies said they were looking for Zakari David Glode around 2:30 a.m. to serve a warrant for arrest. The sheriff’s office received information that Glode was driving a 2013 Toyota Camry when they observed the vehicle in the parking lot of the Denver Mart on Highway 16 Business in Denver.

The suspect then went inside the convenience store when deputies pulled into the parking lot. The officers went inside the store and discovered the man had gone into the restroom. After around 20 minutes, deputies made contact with Globe who stated he was having issues and would not come out. Officers and the clerk tried to make contact but got no response. Officers, at the request of the clerk to check the man’s welfare, used a key to enter the restroom but no one was found inside.

Officers then observed a ceiling tile had been damaged and ordered the suspect to respond or come down from the ceiling. Several ceiling tiles were removed but the man remained in the ceiling area.

Arrest warrants were obtained on Glode for resisting a public officer, injury to real property, and second degree trespassing, according to deputies.