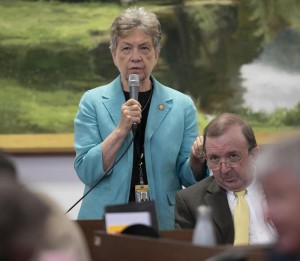 Rep. Verla Insko of Chapel Hill, N.C. speaks on the floor of the N.C. House Wednesday Sept. 11, 2019. Insko says she won’t seek reelection next year. The 13-term Orange County Democrat made the announcement on Wednesday, Sept. 15, 2021. She is the longest-serving House Democrat currently in the chamber. (Robert Willett/The News & Observer via AP)

Insko joined the state House in 1997 and became a consistent, liberal voice on expanding health care access and mental health service reforms. The Orange County representative also was a top budget-writer on health issues when Democrats controlled the House.

She helped lead a committee in the early 2000s focused on improving ballot security, especially with the rise of electronic voting system.

Insko, 85, said she would serve out the remainder of her term through the end of 2022.

“It has been a great honor and privilege to represent the citizens of Chapel Hill, Carrboro and Orange County in the North Carolina General Assembly,” Insko said in a news release. “I’m proud of the work I’ve done over the past 24 years, especially in education, health care and election law.”

Now in her 13th term, Insko is second in House seniority only to GOP Rep. Julia Howard of Davie County. The only other current Democratic legislator who’s served as many House terms as Insko is Senate Minority Leader Dan Blue, who was also House speaker in the early 1990s.

Her announcement comes weeks before the GOP-controlled legislature draws General Assembly districts for the next decade. Her departure will give mapmakers more flexibility to set boundaries in Orange County. Candidate filing begins in December. The Democratic primary winner in March almost assuredly will get elected to the seat in November 2022 given the area’s leftward electoral leaning.

Insko, a retired health care administrator, previously served on the Chapel Hill-Carrboro Board of Education and Orange County commissioners. She also once worked in U.S. Rep. David Price’s district office.