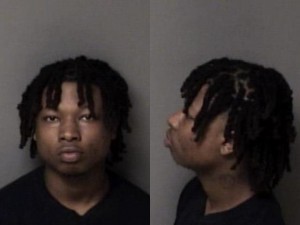 GASTONIA, N.C. — A Lancaster, South Carolina man has been charged after a 50-year-old was found fatally shot in a Gastonia roadway Tuesday night, according to the police department.

A Gastonia police officer was driving on West Airline Avenue, near Gaston Avenue, around 7:30 p.m. when he saw man lying in the roadway. The officer checked on the victim, identified as Lamar Fitzgerald Crawford, and determined he was suffering from a life-threatening gunshot wound.

The officer also observed a man, later identified as 21-year-old Elijah Robinson, standing on the porch of a nearby residence holding a handgun, according to police.

At the same time, multiple 911 calls were made reporting the shooting. Medic responded and transported Crawford to a local hospital where he died due to his injuries.

Robinson was taken into custody and through an initial investigation learned the two men did not know each other. Police said Crawford was charged with first-degree murder.

Anyone with information regarding this homicide is asked to call the Gastonia Police Department at 704-866-6702.