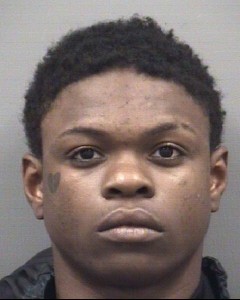 SALISBURY, N.C. — Authorities have apprehended a man who they say pulled a gun on a Rowan County sheriff’s deputy, then head-butted her before running off from a fast-food restaurant and prompting a search.

News outlets reported a sheriff’s deputy was going to a drive-thru line early on Wednesday when workers asked her to check on two men who appeared to be passed out in a car in the line, according to a news release. The deputy and a Salisbury police officer dispatched to the scene spoke to one of the men, who kept putting his left hand under his leg despite commands to keep his hands where they could be seen, authorities said.

The man jumped out of the car, shoved the weapon into the deputy’s vest and hit her chin with his head before running off, the news release said. Aided by a N.C. State Highway Patrol helicopter, deputies and police located 18-year-old Dayshun Lamont Davis at a home and arrested him without incident.

Davis is being held on a $500,000 bond on multiple charges, including assault with a deadly weapon on a government official. It’s not known if he has an attorney.

Edge On The Clock: Kourtney Kardashian Is Engaged