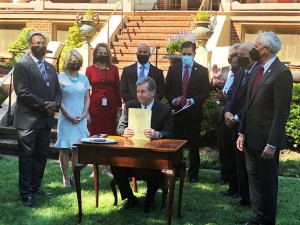 Legislation approved earlier this year and taking effect Oct. 1 includes several provisions from broader criminal justice reform bills that are designed to identify wayward officers and deputies and push them out of law enforcement. The measures stemmed from calls for change during a time of national focus on racial inequity and police shootings of Black residents.

One law directs police and deputy standards commissions to create a public database of law enforcement officers who have had their certifications revoked or suspended.

A confidential database also will be created by the Department of Justice that contains “critical incident information” about when an officer has been involved in a case resulting in death or serious injury. And officers now will be required to tell standards commissions when they receive letters from prosecutors telling them they’ve been untruthful and shouldn’t testify in criminal cases.

People running for sheriff in 2022 and beyond now will have to sign a form stating they’ve not been convicted of a felony, even if one has been formally expunged from their record. The law clarifies how to implement a 2010 North Carolina constitutional amendment barring convicted felons from running for the job.

Another law taking effect will direct hospitals to let a clergy member visit a patient even when there’s a declared emergency like the one under COVID-19. The bill was named for a Beaufort County man who died at a Greenville hospital in 2020. The minister will still have to clear health screenings to visit.

North Carolina distilleries also can now sell their own liquor products in bottles on Sundays starting this weekend due to changes in a wide-ranging alcoholic beverage control law. ABC stores remain closed statewide on Sundays.

For several years, distilleries have been able to sell their bottles to people who tour their operations, but not on Sundays. This weekend will mark the first time since the end of Prohibition that liquor bottles will be legally sold on a Sunday in North Carolina, according to the Distilled Spirits Council of the United States.