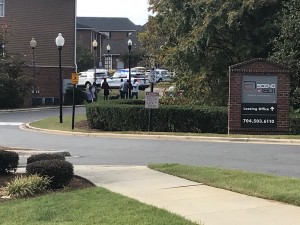 UPDATE 10/26/2021:  CMPD has charged Asante Sharif Turner, 21 after three people were shot Monday afternoon. Turner has two counts of assault with a deadly weapon with intent to kill, one count of assault inflicting serious injury, shooting in the city limits, and injury to personal property. He is jailed under $256,000 bond.

Shortly following Monday’s shooting, a trooper with North Carolina State Highway Patrol initiated a traffic stop on a vehicle for a traffic infraction near Interstate 85 and U.S. 29 Hwy. From information and evidence obtained, the driver of the vehicle, later identified as Turner, was found to be a suspect in this case and was detained.

UPDATE – CMPD says they have a detained a person they believe is involved, and detectives are reviewing what charges may be appropriate. No names have been released.

CHARLOTTE, N.C. — Three people have been shot according to emergency officials. The shooting happened in the 1700 block of Willow Haven Lane in the University area at an apartment complex. Medic says two people have been transported to Carolinas Medical Center with life-threatening injuries. One person was transported to Novant Presbyterian with non-life threatening injuries.

Charlotte-Mecklenburg Police Department is investigating. We will update this story as more details become available.