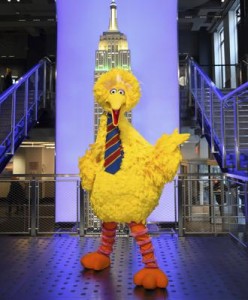 FILE – Sesame Street’s Big Bird participates in the ceremonial lighting of the Empire State Building in honor of Sesame Street’s 50th anniversary on Friday, Nov. 8, 2019, in New York. When Big Bird tweeted he had been vaccinated against COVID-19, conservative politicians immediately pushed back, including Ted Cruz who grilled Big Bird for what he called “government propaganda.” (Photo by Evan Agostini/Invision/AP, File)

NASHVILLE, Tenn. — In 1972, Big Bird lined up on `Sesame Street’ to receive a measles vaccine as part of a campaign to get more youngsters inoculated against the disease.

However, when that same iconic 8-foot-tall children’s character tweeted last weekend he had been vaccinated against COVID-19, conservative politicians immediately pushed back, including Texas Sen. Ted Cruz who grilled Big Bird for what he called “government propaganda.”

I got the COVID-19 vaccine today! My wing is feeling a little sore, but it'll give my body an extra protective boost that keeps me and others healthy.

Ms. @EricaRHill even said I’ve been getting vaccines since I was a little bird. I had no idea!

This latest fallout marked a new contentious flashpoint that’s plagued previous rollouts of the vaccine, just as the shot becomes available to children between the ages of 5 and 11.