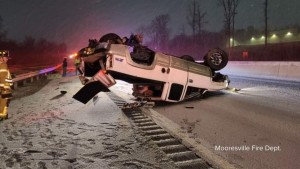 MOORESVILLE, N.C. — One lane of I-77 is now open in Mooresville after a truck flipped over in icy conditions early Sunday morning, fire officials say.

Around 6:30 a.m., firefighters responded to the crash in the southbound lanes of I-77 near Exit 35 for Brawley School Road.

At the scene, firefighters found an overturned truck in the left lane of travel.

Mooresville Fire officials say no one was injured and no other vehicles were involved in the crash.

All lanes of traffic were closed by crews due to the wreck.

Talking With The Star of “Walker Independence” Katherine McNamara