The Charlotte-Mecklenburg Police Department has located and arrested a 37-year-old suspect, accused of fatally shooting a man at a southwest Charlotte apartment complex, in South Carolina on Tuesday.

Through an investigation, homicide detectives identified Lawrence Ferrell as the suspect in the homicide case of Andre Richardson, and warrants were issued for his arrest.

With the assistance of the South Carolina Law Enforcement Division (SLED) and the Beaufort County Sheriff’s Office, Ferrell was located and arrested in South Carolina on Feb. 1.

Charlotte-Mecklenburg detectives traveled to South Carolina to interview Ferrell who is currently in the custody of the Beaufort County Detention Center awaiting extradition to Mecklenburg County.

He has been charged with 1st degree murder and possession of a firearm by convicted felon, according to authorities. 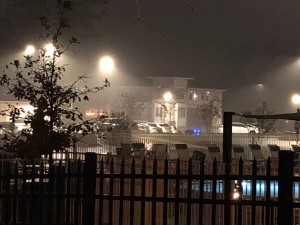 CHARLOTTE, N.C. — Police are investigating a homicide at an apartment complex in southwest Charlotte.

Detectives with Charlotte-Mecklenburg Police Department say they responded to the Sycamore at Tyvola apartments on Quercus Cove Court shortly after 5 p.m. on Friday. When they arrived a man was found suffering from a gunshot wound. He was pronounced at the scene according to Medic.

At this time there has not been a suspect arrested for the deadly shooting.

Detectives are actively investigating and we will update this story as more information becomes available.