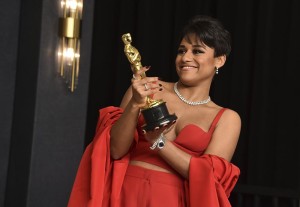 Ariana DeBose, winner of the award for best performance by an actress in a supporting role for “West Side Story,” poses in the press room at the Oscars on Sunday, March 27, 2022, at the Dolby Theatre in Los Angeles. (Photo by Jordan Strauss/Invision/AP)

LOS ANGELES — Ariana DeBose lived up to Oscar predictions and followed the path of her “West Side Story” predecessor Rita Moreno.

DeBose won the best supporting actress trophy Sunday for her breakout performance as the fierce Anita, 60 years after Moreno claimed the award in 1962 for the original film version of the Broadway musical.

She becomes the first Afro-Latina and openly LGBTQ actor win in the category.