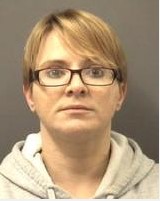 STATESVILLE, N.C. — A Statesville woman has been charged with murder after a victim was found fatally stabbed Monday, according to police.

The Statesville Police Department responded to a stabbing at 503 Valley Street. The stab victim ran to a 507 Valley Street apartment to get help but collapsed in the doorway.

Jessie Owenby was identified as the suspect and was arrested at the scene by authorities.

According to police, Owenby was taken before a magistrate and charged with homicide and is currently being held in the Iredell County jail with no bond.

The investigation is active and ongoing.