A Silver Alert has been cancelled for missing 84-year-old John Simmons, Jr. of Huntersville after he was found Thursday evening. 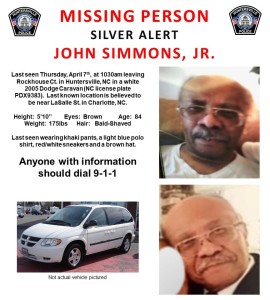 Authorities say he was last seen leaving a home on Rockhouse Court in Huntersville around 10:30 a.m. on Thursday in a white 20015 Dodge Caravan with N.C. license plate PDX9383.

He was last seen wearing khaki pants, a light blue polo shirt, red and white sneakers, and a brown hat.

Authorities say he was last seen near LaSalle Street in Charlotte.

Anyone with information on his whereabouts is asked to call 911 immediately.