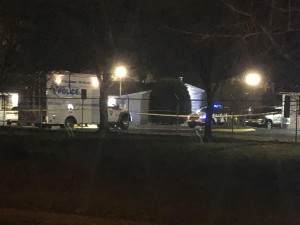 A 34-year-old man is under arrest for allegedly stealing a car and trying to run over an officer while fleeing from law enforcement back in March, according to CMPD.

Police say Carneal Robinson has been charged with Assault With a Deadly Weapon on a Police Officer and Possession of a Stolen Motor Vehicle.

Robinson was taken into custody of the Mecklenburg County Sheriff’s Office by deputies.

Officers have located the suspect vehicle involved in an officer-involved shooting on Wednesday.

Officers were patrolling in search of a vehicle that was recently reported by the owner as being taken off Farmhurst Drive without permission.

Once police identified a vehicle that matched the same description as the victim’s vehicle at an extended stay motel, an officer matched the VIN to the car while other officers spoke to the two occupants inside the vehicle.

As officers approached, the passenger inside the vehicle excited the car and left the scene.

Officers then tried to detain the driver of the car, but initial investigation reveals that the driver tried to run over one officer.

The officer involved perceived this action as a lethal threat and fired his gun at the driver.

Police say the driver then took off in a grey Ford Fusion.

Officers are actively looking for the driver.

No officers were injured during this incident and police believe no one was struck by gunfire.

Anyone with more information can leave an anonymous tip with Crime Stoppers at 704-334-1600 or http://charlottecrimestoppers.com/.