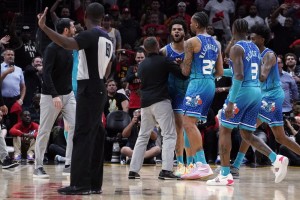 Charlotte Hornets forward Miles Bridges (0) is restrained by P.J. Washington (25) and others as he argues with an official after being charged with a foul during the second half of the team’s NBA play-in basketball game against the Atlanta Hawks on Wednesday, April 13, 2022, in Atlanta. Bridges was ejected. (AP Photo/John Bazemore)

CHARLOTTE, N.C. — The NBA has fined Charlotte Hornets forward Miles Bridges $50,000 for throwing his mouthpiece into the crowd after being ejected from Wednesday night’s play-in loss to the Hawks in Atlanta.

Bridges was being heckled as he left the floor through the tunnel heading back to the locker room.

He threw his mouthpiece, hitting a young female.

Bridges apologized after the game and again following his exit interview in Charlotte saying he deserved any punishment the league handed down.

Hough Ready To Open Season Against Christ The King Catholic